Learn How To Play 5-Card PLO In 5 Minutes

We have 5 Fingers, 5 Toes, 5 Senses, 5 Appendages & 5 Major Systems of the Body.
So, Here’s Introducing Five-Card Pot-Limit Omaha! Learn It In 5 Minutes! Go-

After Texas Holdem poker, Pot-Limit Omaha (PLO) is perhaps the most played poker variant in the world. Since its introduction in the online poker room, the standard 4 Card PLO has been such a huge success that people have come up with different iterations of online Omaha poker games. Enter 5 Card PLO

Like 4 Card PLO, 5 Card PLO is played with Pot-Limit rules: this means that the maximum bet amount permitted is the total size of the pot. The 5 card PLO strategy is the same as 4-Card Omaha games with the only exception of an extra hole card dealt with each player at the table. So, in 5 Card PLO, players receive 5 hole cards and must make the best hand possible using 2 hole cards and 3 community cards. Sounds simple. Well, read more to understand the intricacies involved in 5 cards PLO.

Pot-Limit Omaha has always been a game of nuts. Pocket Aces or Kings rarely win any hand, but, 5 Card PLO is even harder since even straights and flushes are fairly commonplace. Poker is a probability game and adding another card to the mix, adds multiple factors to the way the game should be played. The ranges played by a player should be tighter since all players have 5 cards and chasing straights and flushes should always to the nuts (even this doesn’t guarantee a winning hand).

Even though bluffing in PLO is comparatively lesser than in Texas Holdem, it goes even further down with the bluffing taking place in 5 Card PLO. Also, bankroll management is of crucial importance in 5 Card PLO since the variance is greater than its standard counterpart and much, much higher than Texas Holdem poker.

In this blog, we will cover the best 5 cards PLO strategies that even novices can follow. But first, how do we play this poker variant?

How to Play 5-Card Pot-Limit Omaha

The rules are the same as 4 Card PLO – every player is dealt five cards face down with five community cards being placed on the table (whose value is shown as the round progresses). Each player has to make the best five-card combination from among the board and personal cards and bet on the same. But, unlike Texas Holdem Poker, the 5 card PLO rules are different. Players can’t use all five cards, and each player has to choose exactly two of the five-hole cards along with three of the community cards to make the best possible five-card hand. 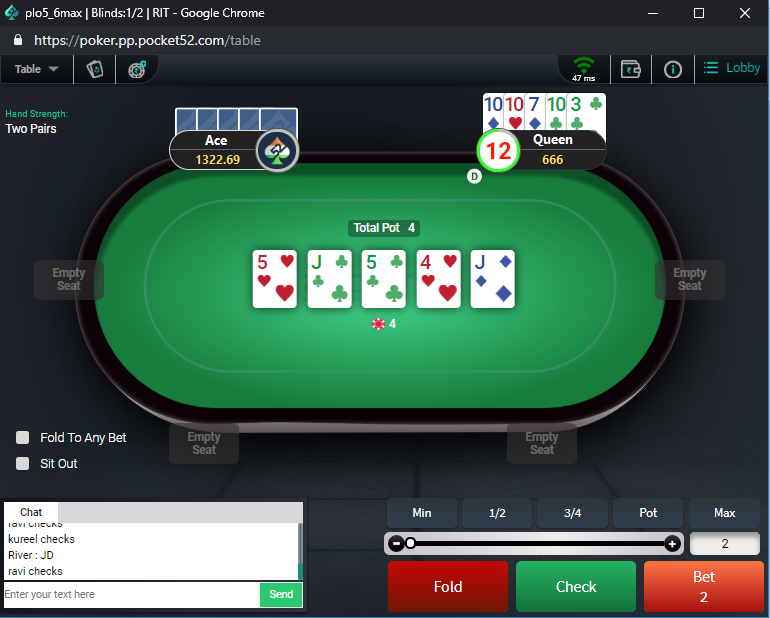 Remember this 5-card PLO rule: Unlike NLHE games, you cannot bet any amount you want in PLO. In pot-limit games, the maximum amount that a player can bet in PLO games is the total size of the pot. The same rule applies to Five-Card Pot-Limit Omaha games. The maximum amount you can bet is easily calculated:

So, the hand ranking in 5 Card PLO is the same as 4-Card PLO. Just in case, here’s a quick recap of the different hand rankings:

There are so many variables when you are playing poker. It can range from table size, players of the table, the position, the format (cash or poker tournaments), blind levels, etc., that you will never play the same set of hole cards in the same manner. But there are certain truths to the game which will not change irrespective of any variable. We have some time-tested 5 cards PLO strategies that will help you navigate the game.

1. Your Starting Hand Makes or Breaks Your Game

Yes! That’s true! With five cards comprising your starting hand, you have innumerable options in discarding three. This will be crucial in determining your chances of winning later on. This choice is the hallmark of determining your probability of winning. Hence, make or break your game!

2. Be Careful in Taking a Seat

Not every table is meant for you. Your first strategy in 5 cards PLO, is to identify which table/s are yours to play. You want to win a decent percentage of hands and for that, you should sit at table/s with players that are slightly weaker than you. Identifying that is easier said than done. The easiest way is to focus on the ‘fish’.

3. Don’t be Tempted to Call

One of the silent rules of 5 card PLO is to only raise or fold. The premise is that you will make the best out of a strong hand and hence, will raise. This can also prompt other players to increase bets leading to a bigger pot. Calling is seen as a sign of not having enough confidence in your hand. So, your go-to move should be to fold in that case.

4. Raises is a Strong Indicator

As mentioned in the previous point, you should only raise if you are confident in the strength of your hand. The same holds true for your opponent. He will also be following the same 5 card PLO strategy. He could also be bluffing but the chances are low. You should be very confident in your hand to bet that round.

5. Aces are Not the King

Unlike Texas Hold’em, a pair of unsuited Aces in the pre-flop is not a high probability card for winning. Statistically, there are five-hole cards at play which is a game-changer. So, Aces don’t hold as much value as you presume them to have.

6. Say No to Limping

This cannot be said enough times. Calling all the time would make you a weaker player, and even if you are bluffing trying to be unpredictable, your playing style/tell will eventually be your downfall. Bluff-limping is not a good strategy for a novice or an intermediate player.

Do you know the math? There are 2.6 million starting hand positions in 5 cards PLO. That’s a lot. This probability is critical to the way you should approach this game. So, your  5 card PLO strategy should be to study all possible good hands in this version of Omaha.

This is a contradiction to what we spoke about earlier. But hear us out – Aces in an early position is not always an indication you should raise. The reason is that at times a strong opening hand is a good way for you to get other people to contribute to the pot. Too high a raise, in the beginning, will push away whatever potential winnings you can gain from such a hand.

9. Your Position Is Key

Position! Position! Position! It is as important as when playing Texas Hold’em. Your position determines the power you hold in controlling the flow of the game. How well you use it to make informed decisions is how an average Omaha player is distinguished from a pro-Omaha player.

This should have given you a broad understanding of the mechanics of the game and will help you develop a few 5 card PLO strategies of your own.

You are now ready to play 5 Card Pot-Limit Omaha Poker! Check out the online poker tables at Pocket52