Learn about the variation of poker called Pineapple Poker 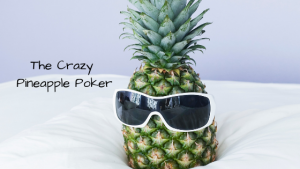 But how to play the game of Pineapple Poker?

Just like in the game of Texas Hold’em Poker, the small and the big blinds are posted by the two players to the left of the dealer button respectively. The blinds are the forced bets player’s post before the deal. Its only until here pineapple and hold’em hold similarities.
Unlike hold’em, in pineapple poker, the players are dealt three hole cards to begin the game.
Before the betting starts each player is expected to remove one hole card out of the three. Each player is left with two hole cards. This is again very similar to the game of hold’em. The Flop is dealt face up and then the turn and the river after every betting around the same community cards dealt after every betting round. The difference lies in the weight of the hand rankings. But the gameplay is pretty similar to Hold’em until the end.

So when does Pineapple Get Crazy?

Read about it in the next article to make your home games a worthwhile spent with your close friends.