Are essentially next to the rules of the game itself. Prima facia poker seems to be a game of cards, and merely on the surface, it is.

However, one is not required to dive deeper to realize, that poker is not just a game of cards, it is a game of people and their behavior. Behavior that results from the situations that shape upon the table during a grind. 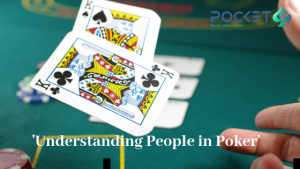 Let’s see… so the player on your either side just posted a big bet. Our next interrogative thought will be…

Does he have a huge hand?

Is she gauging the probability to place my cards?

What does he foresee? ‘Your’ reaction will be?

The many-layered analysis that can be enforced in these situations, is intellectually stimulating.

One wins in poker by acting, with respect to the calculated probabilities, more accurately than your opponent. The pivoting role of probability is what makes it so hard to learn to play poker at another level.

Facing an opponent requires a deeper understanding of nonverbal communication. Body language with respect to emotions and temperament.

Playing a game with much at stake requires not only gauging the opponents but also requires one to increase their emotional intelligence.

There is much to learn in this area of the gameplay. But habits are built gradually.  Understanding poker psychology takes practice, keen observation, and love for the game

We will further post on other aspects of realism in psychology and poker.