Over 60 Bracelets Have Already Been Won at the 50th Annual World Series of Poker! Here’s the WSOP 2019 Winners List from Event #1 – Event #10 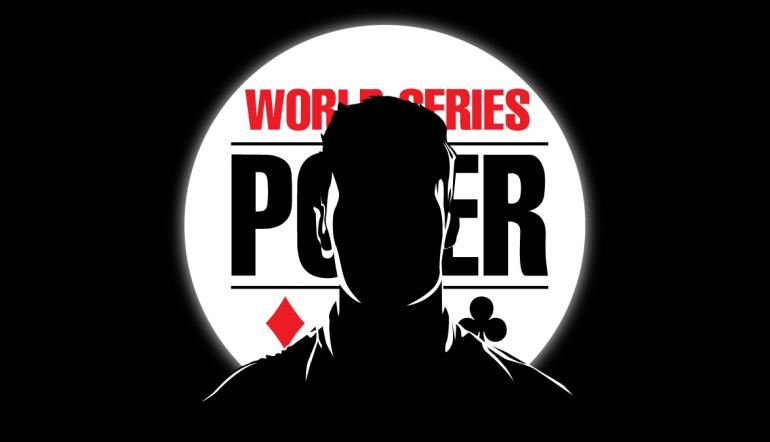 The 50th annual tournament of the biggest poker event in the world, the 2019 World Series of Poker or WSOP, is celebrating its Golden Jubilee at the Rio All-Suite Hotel & Casino in Las Vegas, Nevada. The event began 28th May and will continue till 16th July 2019. The World Series of Poker is every poker player’s ultimate dream and this year at the 2019 WSOP there will be 90 bracelet events for players to earn the coveted title.

Halfway through the event, over 60 bracelets have already been won by players. Here are the winners of the first 10 events- 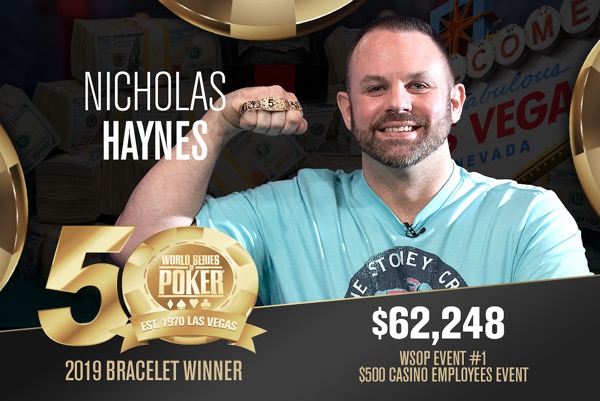 Casino employees battled it out between themselves where Nicholas Haynes, a Michigan-born, Florida-raised poker dealer came out on top winning his first WSOP bracelet & $62,248 cash prize. Haynes has worked at Aria in Las Vegas for the last 18 months years 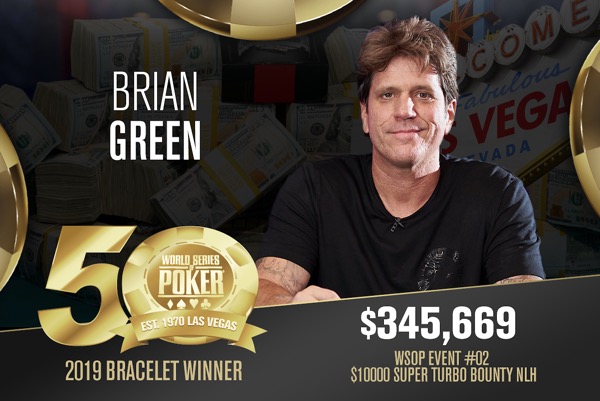 It kind of gets the monkey off my back. Now I can play poker without having that on my mind,” Green said after the win. “I tend to do well when I play pro-heavy fields… I know most of the guys who play $10Ks are pretty good players. In a turbo, though, there’s a lot of flipping too, not a lot of post-flop poker. Still, a win’s a win, it’s hard to win a poker tournament.

Brian Green became the first official bracelet winner for the 2019 WSOP. It was a special win for Green’s since it’s also his first bracelet win. Green has been a poker player since 1984 and has earned $3m in his poker career. $3k bounties were also up for grabs for busting other players. 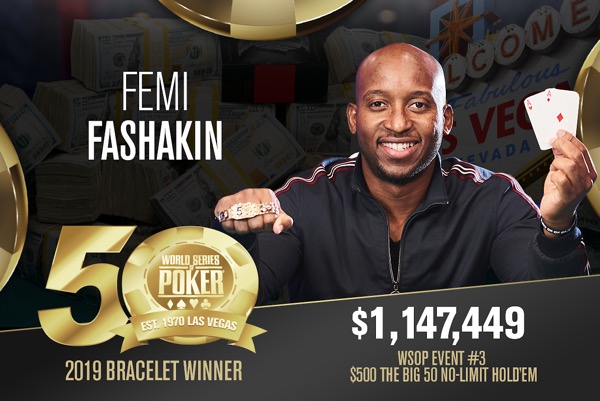 Overwhelmed, it’s really amazing, super excited. I can’t even describe it but I’m also grateful and it’s a humbling experience. It’s my third cash at the WSOP here in Vegas and I think it’s been okay so far! I didn’t really plan a celebration because I wasn’t sure. But I had a feeling! Today I sprinted in the hallway of the hotel and I thought: when I get to the end of the door, I’m going to stop there and visualize the bracelet. I did that sprint and I saw it…

The Big 50 was the largest live poker tournament ever held with a total prize pool was $13,509,435 (largest ever for a $500 tournament). Femi Fashakin won the Big 50 and took home his first WSOP bracelet with 4,257 players making it in the money. 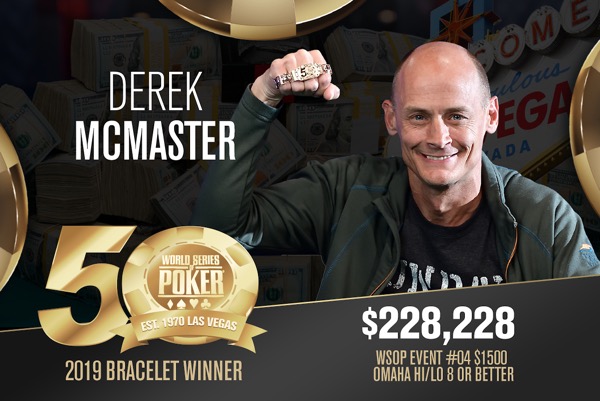 It was very surreal to me. I’ve just been on cloud nine since last night, all week. I was happy to be here and I enjoyed playing with these guys. I try to just have fun when I’m playing. If I’m not having fun I’m usually not doing very well. The more fun I have, it seems like stuff goes my way. 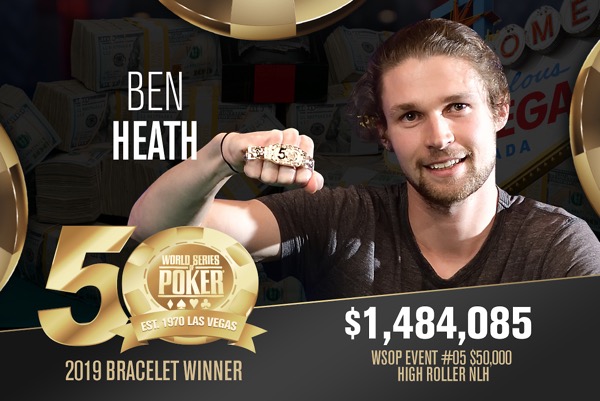 It feels a lot better than I thought it would. When I was younger, I was shy and didn’t really want to win the bracelet. I would have rather just taken second place. But now that it has happened, it feels great!

First WSOP bracelet for Ben Heath, an online and live high roller player who was kind of an underdog as all his opponents at the final table was a previous WSOP bracelet winner. 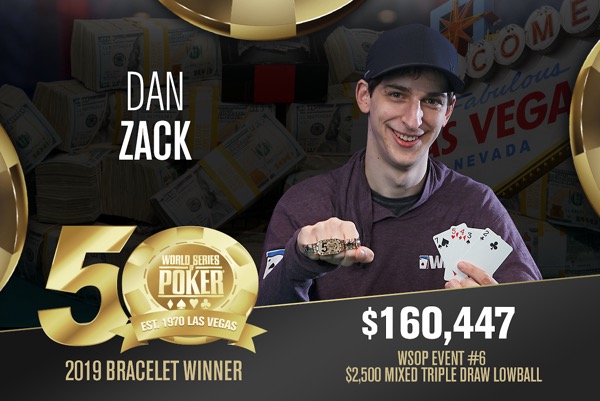 This whole tournament, I was not above average until I literally came to the final table with seven left. It has been ‘yeah, I’m in dead last’. Just over and over again. This is a relief. I was starting to question if I was doing something terrible at every final table that I made. 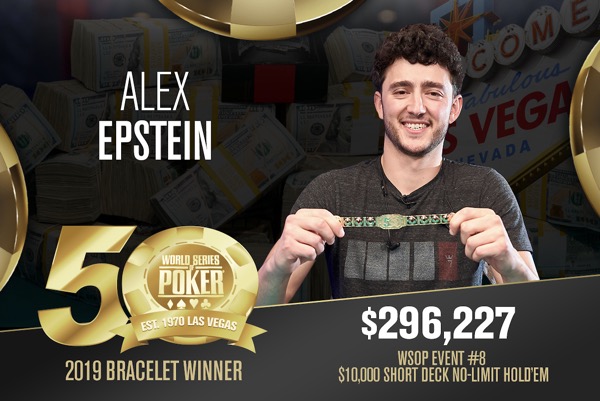 Walking to the Rio today, I was thinking that I just wanted to enjoy the experience. I knew that the other good players at the final table were shorter stacks so I had a very good chance if things broke my way. I ran so far below [expected value] in PLO this summer, that I decided to play an event with even higher variance than that thinking that I was just due.

The first-ever $10,000 Short Deck Hold’em event at the WSOP was won by Alex Epstein, a real estate broker. It was Epstein’s his first-ever WSOP bracelet. 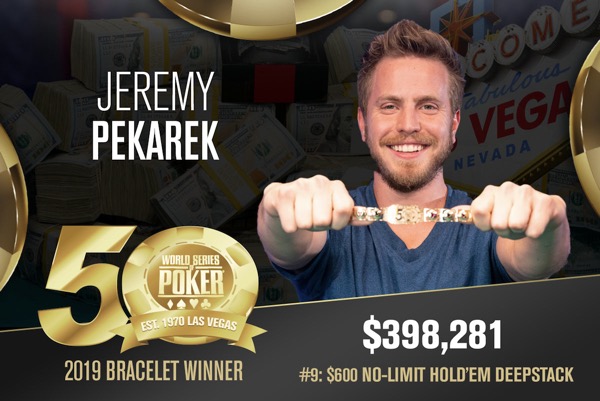 It’s been an up-and-down journey. This was always the goal. Whenever I started playing poker I was like, I wanna win a bracelet and here I am. I just feel like this is a culmination of the past five years of just me learning more about myself. Self-awareness is everything in this game. There was a lot of lessons I had to learn when I came out here. And I wasn’t really ready for it. I learned a lot of hard lessons and I felt like I was ready.

Jeremy Pekarek finally got his first bracelet finishing at the top after trying to win a bracelet for 7 years. 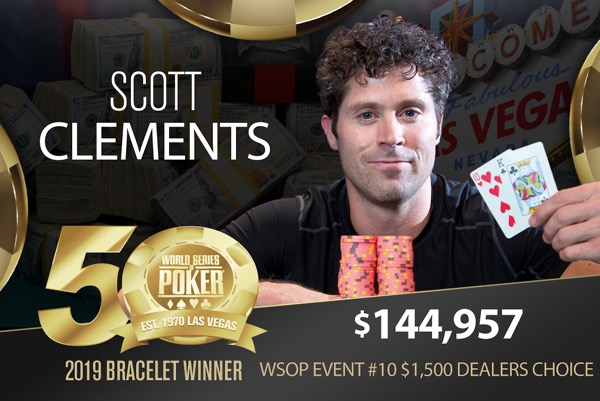 I think in all my other pictures I didn’t smile, but this one I’m definitely smiling, because I got back. If I’d have got second in this, it would have been pretty rough, because I’ve gotten a lot of seconds and I did not want to get another second.” When asked how this bracelet win compared to his first two, he said, “It’s probably number one, because it’s been 12 years. I was pretty cocky back then, when I won the first two right off. Plus, I’ve got three kids, so I can give them all a bracelet.

This is the third bracelet for It was a big day for Scott Clements, who hails from Mount Vernon, Washington, as he won his 3rd WSOP bracelet. Clements won his last bracelet in 2007.

Read More:
Learn How To Play Poker
Interview with Poker Players
The Reason Why Pocket52’s RNG+ Platform is a Cut Above the Rest
The Many Differences Between Texas Holdem and Pot Limit Omaha Poker