Daniel Negreanu, Chris Moneymaker win big at the WSOP First Fifty Honors Gala held at the Rio All-Suites Hotel and Casino in Las Vegas. Along with the pair, Doyle Brunson & Phil Hellmuth were also voted as the four most important players in WSOP history. 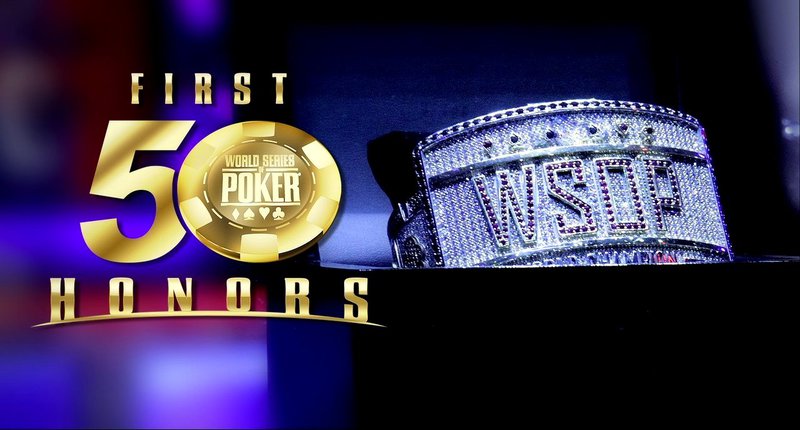 It is important we take time out to honour the WSOP’s first 50 years and pay tribute to those that paved the way for where we are today. We look forward to getting the poker community together on Saturday and commemorating 50 years of the World Series of Poker.
Ty Stewart; WSOP Executive Director

WSOP is widely recognised as the granddaddy of all poker tournaments. The 50th Annual World Series of Poker, or 2019 WSOP as people like to call it, has been underway since the end of May and, to celebrate its special 50th anniversary, WSOP released a list of “50 Greatest Poker Players” in history which met with some controversy. You can view the list here.

Officials also announced that a special ceremony will take place inside the Rio All-Suite Hotel & Casino in Las Vegas at 8 P.M. this Saturday (29th June) for those that have made it onto the list. The special “First Fifty Honors Gala” will be hosted by Lon McEachern and Norman Chad and will honour those named while looking back at some of the other top 50 moments in WSOP history.

The award presentation, along with cocktails and dinner, took place in the Brasilia Ballroom and was open to all WSOP gold bracelet winners and VIPs. Dozens of bracelet winners, poker legends, VIPs and others gathered with the WSOP brass to celebrate the night and the long 50-year history of WSOP.

World Series of Poker honoured the best in the business during a special First Fifty Honours celebration over the weekend, creating categories and gathering fan votes to honour some of the most influential players and moments in the history of poker.

On the big night, poker legends like Doyle Brunson, Phil Hellmuth, Chris Moneymaker and Daniel Negreanu were voted as the four most important players in WSOP history. Their contributions to the World Series of Poker over the years has been instrumental in turning the WSOP into what it has become today to thousands of players all over the world. 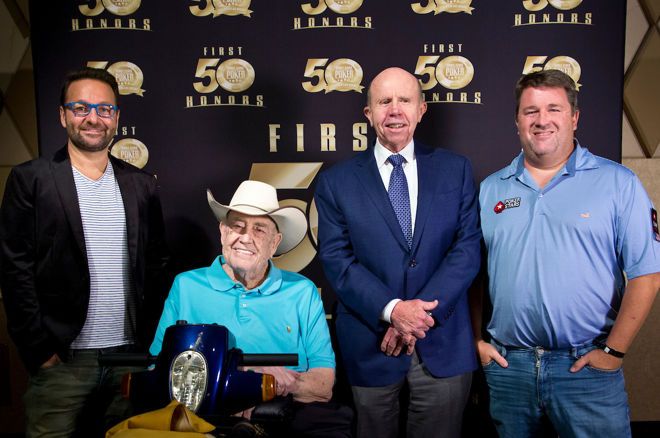 Chris Moneymaker & Daniel Negreanu were the top winners of the night being named in 3 categories apiece. Apart from being named in the “Four Most Important Players in WSOP History”, Daniel ‘KidPoker’ Negreanu was also voted “Fan Favorite” & “Best Overall WSOP Performance (Single Year)” for his two bracelets and four final tables in 2013.

Did You Know: Daniel Negreanu sets up an RV just outside the Rio’s doors during WSOP? Also, he is placed second in poker’s all-time money list with over $40 million in live tournament earnings to his credit, just behind Justin Bonomo.

Very thankful to the fans for voting. Three trophies from @WSOP. Very honored.

Chris Moneymaker, the man responsible for the ‘Moneymaker Effect’ and the online poker boom, received a lot of love from WSOP after being snubbed earlier when his name was not included in the 50 Greatest Poker Players list. The WSOP was severely criticised by critics, fans and poker players for excluding many players who played an important role in taking the game to the peak of where it stands today. Moneymaker’s name was mentioned more than any other player.

You can’t think of WSOP Main Event history without Chris Moneymaker’s named being mentioned. Moneymaker, an accountant from Tennessee, shipped an $86 online satellite tournament to win a seat in the Main Event of the 2003 World Series of Poker. And his “bluff of the century”, as Norman Chad so eloquently put it, was voted as the “Most Memorable TV Hand”. Moneymaker pulled off a bluff that few pro players ever could by going all in against Sammy Farha after missing his straight and flush draws and getting to the river with king-high. Farha had the best hand with a pair of 9s, but decided to go against an all-in bet. This changed the momentum of the game and Moneymaker would eventually go on to win the 2003 WSOP Main Event along with a mouthwatering $2.5 million reward! Here’s the bluff of the century:

Moneymaker also took home awards for “Most Impressive WSOP Main Event Win” and “Four Most Important Players in WSOP History,” along with other legends of poker – Doyle Brunson, Phil Hellmuth and Daniel Negreanu.

50 awards were given out tonight at #wsop50. 32 of them went to @CMONEYMAKER, 9 to @RealKidPoker, 5 to @phil_hellmuth, 3 to @TexDolly, and somehow I infiltrated that group and won the last one! ?? In all seriousness though, it’s truly an honor to receive this much respect ❤️

What is the most memorable hand from the first 50 years of the WSOP? We need the public’s help deciding. Please go vote at http://www.wsop.com/promotions/fifty-first-honors/nv/ You could win a prize just for casting a vote!

Read More:
Learn How To Play Poker
Interviews with Poker Players
The Reason Why Pocket52’s RNG+ Platform is a Cut Above the Rest
The Many Differences Between Texas Holdem and Pot Limit Omaha Poker