To become a poker pro, knowing the poker rules is mandatory. There are many poker rules like the betting rounds, poker limits, actions you can take in the game, poker hand rankings, etc. To play the game successfully and aim to win it, it is imperative to know one of the most essential rules of the game. This rule is called poker hand ranking.

Let us know the hand rankings in the most popular poker game – Texas Hold’em Poker. Poker hand ranking has paramount importance in the game as this is the ranking based on which the winner or the player with the best hand combination is determined. Here, we acquaint you with all the Texas Holdem Hand Ranking, hand rankings chart, what beats what, and more. 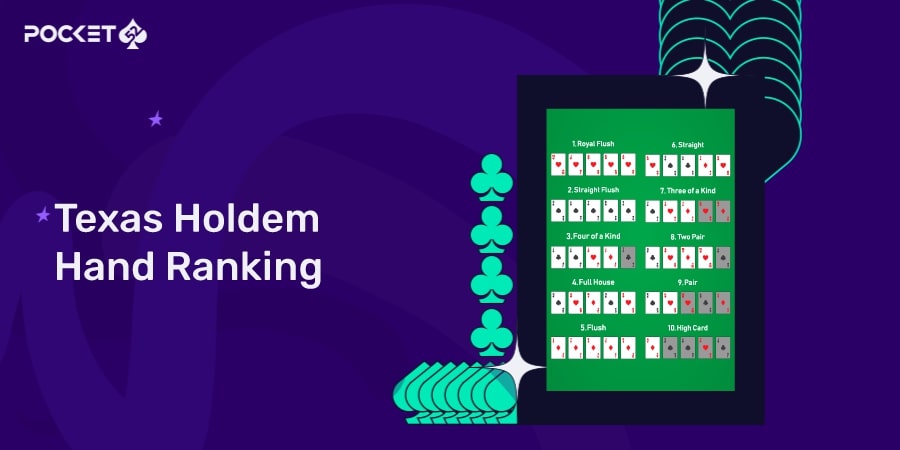 What Are The Hand Ranking Rules To Know?

Here are the most crucial things that you must know about poker hand rankings:

Let us answer them one by one.

How many poker hand rankings are there?

The game of poker follows a poker card rule called poker hand sequence. It has ten possible winning hands. In the list, the Royal Flush is the topmost hand while a High Card is the most-bottom hand. Between these two poker hands, there are eight more hand rankings.

Here is the list of poker hands along with examples.

This is the first and the top poker hand ranking. This hand is called the Royal Flush. Royal Flush is the highest poker card sequence you can ever make but it is rare to get this hand. Royal Flush is a hand that is made up of A, K, Q, J, and 10. Also, these cards are from the same suit of spades or hearts or diamonds or clubs.

The second highest poker hand ranking is the Straight Flush. It is a continuous card sequence containing five cards of the same suit. In case of a tie, the hand combination that has the biggest highest card becomes the winner.

The third spot on the list is Quad or Four of a Kind. This is a poker hand sequence containing four cards of the same rank. So, if you have four Jacks or four 2s, then you can make a Four of a Kind. The remaining or the fifth card with you is called the kicker card which can belong to a different rank.

Fourth on the list is a poker card ranking called the Full House. If you happen to make a hand combination consisting of three cards belonging to one rank and the other card having another rank, then you can claim a Full house. AAAKK is the biggest Full House you can aspire to make. In case two players make the same Full House, the player who has the highest triple hand will become the winner of the game.

The Flush is another good poker card rank to make. As per the flush rules, when you end up having five cards of the same suit, then you can claim Flush. If two players have the same Flush, then the High Card will decide the winner of the game.

If your hand combination has three cards belonging to the same rank, then it is a poker hand order called Three of a kind. The biggest three of a kind are Three aces along with a king and a queen. In case of a tie, the last card can decide the winner.

This is one of the easiest poker card sequences to identify. If you have two cards of the same rank while the other two cards are also of the same rank, then it can be called a Two-pair poker hand rank. If two players in the game make the same pair, the second pair will determine the winner.

One pair is another poker hand rank which can be made if you have two cards of the same rank and the other three cards.

On a high card, the ace is the highest card while seven is the lowest card. A simple card combination that has none of the above rankings is the lowest poker hand.

Now, you also need to know what are the odds of making these hands in the game of Texas Hold’em. Here are the odds for you:

Which hand beats which hand?

It is also essential to know which hand beats which hand.

What Are The Best Hand Rankings In Texas Holdem?

Here we summarize the best hand rankings in the Texas Holdem game.

This is the second-best starting hand. Also called “ace magnets” or “Cowboys” by some poker players. This hand is only afraid of Pocket Aces. This hand has an 82% chance of winning against a hand and 81% chance to win against 99.

The ladies rank at the third best hand. This is another strong pair that has great odds to win before the flop. It beats everything other than AA and KK. The odds of winning with QQ are 80% in case of any hand and 81% against 77.

In the 8th place, this starting hand offers good after-flop playability. With this card, you have a 66% chance to win with a random hand and a 48% chance to win against 77.

Though this ranks lower than unpaired combinations, it doesn’t have bad odds. There are 72% chances to win against a hand and an 82% chance to win against 77

Whether you play the game live at a casino or online on the best poker websites, it is vital to learn the order of poker hands, starting from the best hand you can for, to the worse. Learn these rules and become a poker pro!

How many poker hand rankings are there in the Texas Holdem game?

There are ten poker hand rankings in a particular order.

How is the winner decided in the game?

It is the poker hand ranking rule that decides the winner of the game, this is why you must know and follow these poker rankings.

Most poker games use the poker card rankings such as Texas Holdem, Omaha, 7 card stud, etc.

Which is the top-hand combination in the Texas Holdem game?

The topmost hand you can make in the game is the Royal Flush. It has an Ace, King, Queen, Jack, and ten that belong to the same suit of spades or hearts or diamonds or clubs.

What is the difference between Two-pair and pair?