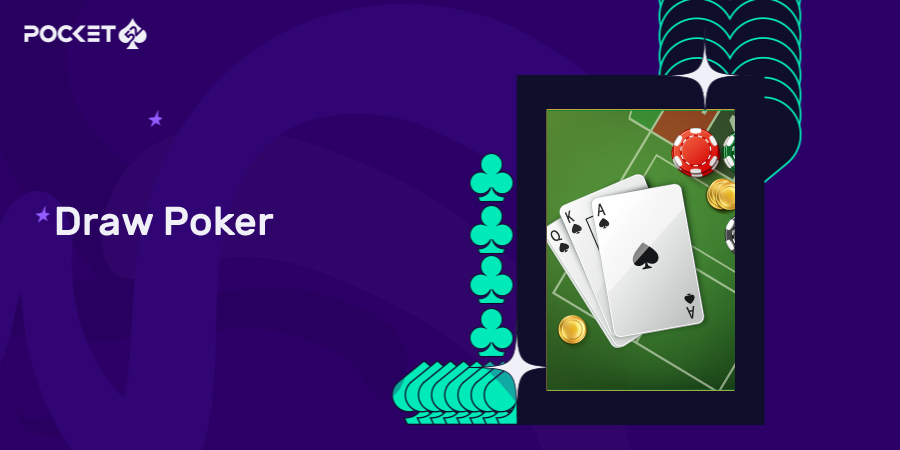 Classic poker games are big-time crowd pullers, be it in a casino or a casual home game. Five-card draw is one such classic poker game which used to be a dominant game until Texas Hold’em started gaining ground.

Although the game is quite similar to Texas Hold’em, it has a different twist to it. 5 card draw is one of the simplest variations of poker and this is usually the game that most of the poker players are introduced to at first.

You start by making the best five-card poker hand. Once all the players have placed the compulsory bets, each player is then dealt five hole cards face down. A round of betting takes place.

After the first round of betting, if more than one player remains, then the first round of drawing cards takes place. Each active player is then supposed to specify how many cards they wish to discard and replace by picking new cards from the deck.

But if you are satisfied with the cards that you have then you can keep them and ‘stand pat.’ You can refrain from drawing any cards. Once this is done, yet another round of betting takes place.

After this, if there is still a player remaining, then a showdown occurs and the player who has made the best five-card hand wins.

The player who is the first to act has the following options:

Fold: End participation in the hand

Raise: Depending on the betting structure, the amount you wish to raise is either fixed or capped as per the size of the pot.

When it comes to betting pre-flop, there are methods that can be used.

There is a small blind and a big blind which is similar to Omaha and Hold’em games.

There are three different types of betting structures that exist for 5-card draw poker. The rules for all the formats are similar, however, the strategy employed will be different.

In 5-card draw poker, the relation that a player has to the dealer/button is also extremely crucial. The closer you are to the dealer, the wider your range of hands, the more profit you make.

Players usually fall into a trap when they play far too many hands, particularly the hand which draws to a flush or a straight. Irrespective of which position you are in, you must always enter the pot with a raise, because if you start limping then other players might also follow suit. In such a situation, you would need a much stronger hand to win the pot.

Play tight from early positions itself and only raise when you have hands with aces or king cards. As your position in the game keeps improving, you can add high pairs such as nines, tens, jacks and queens.

If you get involved with several bad hands, then you might end up in tough spots where you will have to take a weak hand till showdown or use your missed draws as an opportunity to bluff.

If you are still looking for more strategies, then here are a few advanced 5-card draw strategies:

It is extremely important to take notes while playing 5-card draw poker because it helps during the game. Players usually have a playable hand at least once if they are bluffing that hand.

If a particular grinder opens with a jack pair or a better pair than that, and if you hold nine pairs, you must immediately choose to fold instead of calling and waiting for outcomes.

If you are new to the game, then ensure that you bluff cautiously. Just like Hold’em strategy, ensure that you wait for big hands and play with the best winning strategy that you have.

Always pay closer attention to two things when you are bluffing or trying to pick a bluff:

Which card should you discard while playing 5-card draw?

Knowing which cards to discard in the drawing round is what makes or breaks a 5-card draw poker grinder. Let us take a look at some of the examples particularly when employed in low-stakes games might help you yield positive results:

When you hold one pair, you should draw three cards

When you have two pairs, you must draw one card

While holding three of a kind, you must draw two cards.

5-card draw poker is a simple yet fast-paced game. This is the reason it is popular among players who are new to the poker scene. If you are feeling nostalgic, or if you wish to play a fun game with your friends, then you must host a 5-card draw poker game and enjoy!

What are some of the rules of 5 card draw?

Five card draw is one of the most common types of poker hands. Each player is dealt five cards, and then a round of betting follows. Then each player may discard up to 3 cards (4 if your last card is an ace or wild card, in some circles) and get back (from the deck) as many cards as he/she discarded.

What is the other name for a 5-card draw?

5-card draw poker is essentially a draw game and hence there is no flop involved.

Yes, 5-card draw is a game where players are dealt five cards at the start of the game. In 5-card stud, every player gets only two hole cards, one face up and one face down.

Do suits matter in 5-card poker?

No, suits do not make any difference in this 5-card poker game.

How can you expand your range in 5-card poker?

In 5-card draw poker, when you have a good position, you get to expand your range.