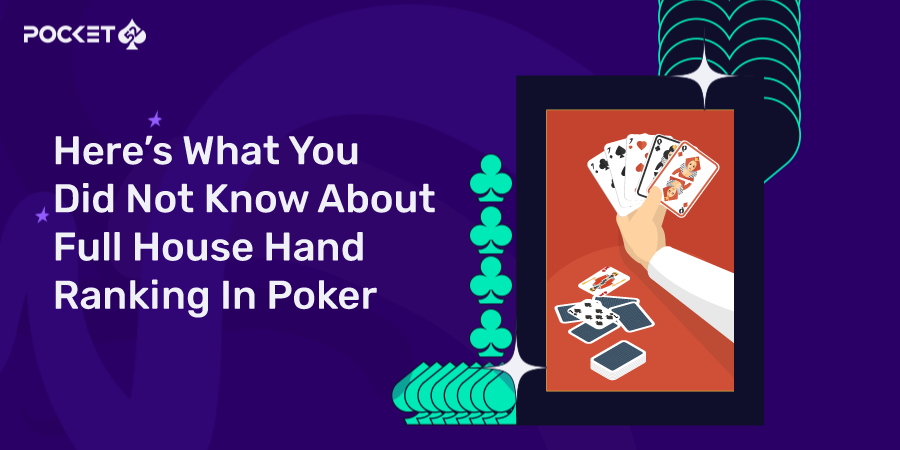 If you know how to play poker, you will know the game is challenging, but also fun at the same time. All the challenges will become fun and exciting if you know your game well and especially the basis of the game. Knowing the rules is very important and among the rules knowing your hand rankings is the most crucial.

What is a Full House hand in poker?

A full house hand consists of three cards of the same rank, and the other two of a similar rank. In other words, a full house poker hand is a combination of three of a kind and a one pair hands in poker. The name ‘full house’ comes from the fact that the hand is full in itself. There is no room for a kicker or supporting card. Also, remember that the suits do not matter in a full house. Every suit is treated equally. What matters is the ranks of the cards.

It was originally called a full hand. However over the years terms like full boat or a tight or a boat have also been used to describe a full house hand in poker.

It is one of the most interesting hands, since you are holding two different poker hands at the same time. It ranks fourth on the poker hand rankings chart and is one of the strongest hands in poker. If you have this hand, you will easily win in most games, until there is a stronger hand in the play such as a four of a kind, straight flush or royal flush.

For example, say you hold pocket Aces, and the board shows K, J 9, A, K. Your best five card hand will be AAAKK, wherein, you use two aces from your hand and one from the board along with two kings from the board to form your full house hand in poker.

A full house is named as ‘the rank of three cards of the same denomination’ full of ‘the rank of the pair.’ For example, in the above instance, aces full of kings. If your full house hand is QQQJJ, then it will be said that you have queens full of jacks. Similarly, 55522, is five’s full of deuces, and so on.

The best possible full house is aces full of kings (AAAKK), since no other full house can beat this hand. It is followed by Kings full of queens (KKKQQ), queens full of jacks (QQQJJ), jacks full of tens (JJJTT) and so on.

Related Post: A Guide To Four Of A Kind Poker Hand

How to make a full house hand in poker?

Another situation could be where you hold K and 2 as your hole cards. The board shows Q, Q, K, 4, K. Here four best cards are on board. All the other players can share two pair hand of QQKK from the board, however, your king in hand gives you an upper hand since now you have the fourth highest ranking hand, i.e., a full house.

In case a full house shows up on the board, all players in contention will split the pot, unless a player has a better hand than a full house like a four of a kind, straight flush or royal flush.

How is full house hand ranked in poker?

The full house holds the fourth highest hand and hence can beat any lower ranking card like a flush, straight, three of a kind, two pairs, one pair and high card hand. On the other hand, four of a kind, straight flush and royal flush can beat a full house since these hands rank higher than a full house. As mentioned above, the rank or denomination of the cards matters. The higher cards you have, the better chances you have to win.

In case two or more players have full house hands, the hand with the higher cards wins. First the three cards of the same rank are considered. If they happen to be the same, then the pair is looked at for deciding the winner. Consider the following hands to better understand how full house hands are ranked.

Next comes the three kings. Again two hands, hand ‘1’ and hand ‘5’ have kings. Hence the pair will be taken into consideration. Hand ‘5’ has a queen pair which is higher than hand ‘1’s jack pair, and hence hand ‘5’ will rank third and hand ‘1’ will rank fourth. Lastly, since the ten three of a kind is the lowest, it will rank lowest, i.e., fifth in this case.

How Does Full House Hand Compare To Other Poker Hands?

A full house poker hand ranks fourth on the poker hand rankings because of its rare probabilities. It is a pretty strong hand to have in a poker game. Only three other hands namely straight flush, four of a kind, and a royal flush are stronger than a Full House. On the contrary, a full house can beat five other hands which are lower than a full house. Additionally, a Full House rarely gets beaten on the river in Texas Hold’em poker.

Probabilities of Forming a Full House in Poker

Probabilities of Forming a Full House in Texas Hold’em

In Texas Hold’em a player is dealt with two hole cards and five community cards are opened on the board in three stages, three cards on the flop, one on the turn and one on the river. Every player is expected to make the best five card hand using either both, one or none of the hole cards and remaining cards from the board. Following are the probabilities of forming a full house in Texas Hold’em at the different stages of the game:

The Pre-Flop Stage – Preflop there is a probability of 0.14% of making a full house, since any random five cards will open on the board from the deck of 52 cards.

On the Flop – There is 0.09% probability of making a full house hand on the flop, given that you are holding three of a kind and a pocket pair.

On the Turn – On the turn there is 12.77% probability of making a full house given you flopped a set.

On the River – Given that you hit a set on the turn, there is 19.57% probability of forming a full house on the river.

Probabilities of Forming a Full House in Omaha

Unlike Texas Hold’em, in Omaha, a player is dealt with four hole cards. There are five community cards which open just like Texas Hold’em. The player is expected to form the best five card hand using minimum and maximum two cards compulsorily from his/her hole cards and three cards from the board. Here are the probabilities of making a full house preflop, on the flop, turn and river in Omaha:

The Pre-Flop Stage – Here there is a probability of 0.14% of making the best five card hand, since five cards will be randomly drawn from the deck consisting of 52 cards.

On the Flop – On the flop there are 0.65% chances of making a full house poker hand if you are holding three of a kind hand, that is three cards of the same rank.

On the Turn – There is a probability of 13.33% of making a full house poker hand on the turn if you are holding three of a kind.

On the River – Given that you hold three of a kind, there are 20.45% probabilities of forming a full house hand on the river.

How to play a full house poker hand?

That being said, a full house is definitely a strong hand, however, one should not forget that there are three other hands that can beat a full house too. It is rare that you will hit a full house on the flop itself. If you do nothing like it, you can play confidently. However, if you don’t, you want to see the turn and river. Therefore, it is advised to limp towards the pot to see the turn and river for cheaper value. To limp means to bet the minimum amount to see the next card. Then as you move closer to the river and you have formed your full house, you can start playing aggressively. This is essentially because as mentioned earlier there are approximately 3,744 ways in which a player can make a full house. Thus, even if you are not dealt with the best hole cards, the later stages of the game can give you a full house hand on the flop, turn or river.

What is a full house hand in poker?

A full house is a set of the best five cards where three cards are of the same rank and the other two cards of a similar rank. In other words, a full house is a combination of three of a kind and one pair together. It is also known as full boat or a tight or a boat.

Full house is one of the strongest poker hands since it ranks fourth among the poker hand rankings. However, it is not the best hand, since stronger hands like royal flush, straight flush and four of a kind can beat a full house.

What if two players have a full house?