A Guide To Four Of A Kind Poker Hand 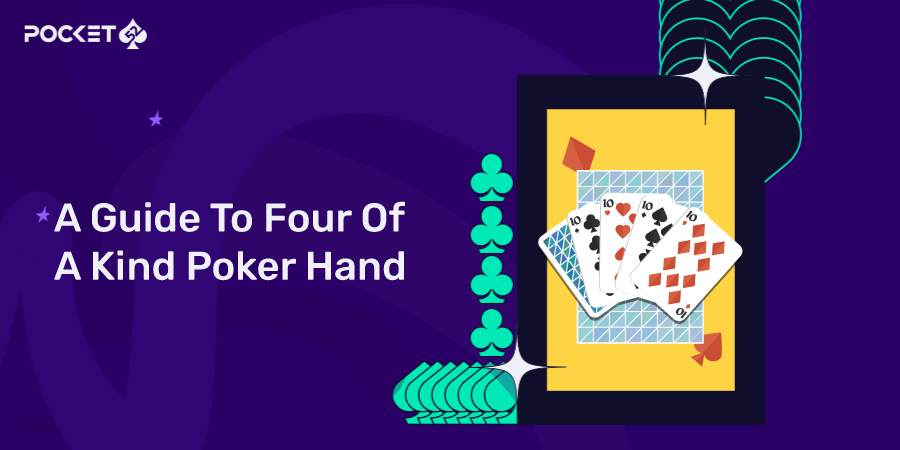 Poker is a popular card game that is played with 52 cards and is gaining ground in India. Poker primarily revolves around the ten hand rankings and four of a kind is one of the crucial hands in poker.  This is the third best hand and it is simply four cards of the same rank. The versatility of the game helps one to have thousands of outcomes in every move. Every poker hand is studied by experts to analyse how it can be played. Several global and Indian poker players often run each other through hand history sessions to get clarity on how to play. How players choose to make each move, despite having a crazy hand like four of a kind, describes their expertise in poker.

Here are the probabilities of forming four of a kind in Texas Hold’em:

Probabilities of forming four of a kind in Omaha:

Only royal flush and straight flush hand are the ones that can beat four of a kind. If you play, the four of a kind, in a Texas hold’em game, then the possibilities are:

This is a decent hand and it can be considered to be a potential minefield. If you’re in a strong position and can afford to play with aggression. In four of a kind, the suits do not matter as it is the rank/denomination that matters. Four of a hand can be beaten by a higher four of a hand, by a straight flush or a royal straight flush.

Four of a kind always carries excellent implied odds. If the four cards on a board are of equal rank, then every player who holds Quads has much less relevance. Any player who has an Ace in the hole wins, once there are four cards of the same rank. If you only use one card to make quads, then you must know that you have implied odds. Never fold a four of a kind hand, which is basically the nuts, especially when you are 100 big blind deep.

With respect to Omaha, four of a kind is trickier because the player can only make use of two hole cards as compared to four. This decreases the probability of making a four of a kind and it stands at 0.0048%. You can try your hand at both these poker variants on Pocket52.

Odds of making Quads on the later streets:

The most common draw to make a Four of a Kind hand is where we already hold Three of a Kind on the current street. Since there are only 4 cards of each rank in the deck, it means that we are left with only one out to make Quads on each street.

To calculate the odds of hitting a four of a kind on either the turn or river, a simple trick can be used.

lets calculate the probability of not hitting and then subtract it from 100.

So even after making a Three of a Kind, we are statistically unlikely to make Quads by the river.

Wondering how to rank a four of a kind hand?

There are 624 potential four of a kind combination in a deck of cards. There are also 156 different ranks of four of a kind. Given this, the fifth card, the kicker will also matter.

When you flop Quads, you should try and make the most of it by extracting as much money as possible. Since this does not happen quite often. The challenging part is that it is quite rare to get Quads. When you flop Quads, you also end up blocking many of the hands with which your opponents could continue. For example, when you hold AA and the flop opens to AA5.

In such a situation, no other player would have Aces.

Most of your opponents won’t grind many 5x hands in most of the situations. The strong hand that you hold will not necessarily be able to block your opponent’s. There is a very big difference between a hand like AA on AA5 as compared to 55 on the flop. How should you strategize?

Regardless of you being in position or not, you should lean towards playing your 55 hole cards on AA5 more aggressively as compared to AA. This can be best done by betting/raising at frequent intervals or by betting large amounts. You could also raise the stakes.

Analyzing Implied Odds of Four of a Kind

Four of a Kind always carries great implied odds provided we use at least one of our hole cards.

If four cards of the same rank are on the board, then every player has four of a kind, so the implied odds are much less relevant. Any player with an Ace in the hole will win, once they are dealt four cards of the same rank on the board. Unfortunately, it’s not very likely that our opponent will invest a large amount of his stack with the King kicker, so we can’t expect excellent implied odds.

Using one of the hole cards to make four of a kind hand (i.e. three cards of equal rank on the board) carries superb implied odds. If our opponent has a big pair in the hole cards, he’ll often assume that he has the nuts with his full house and never fold.

He might be aware that we could hold Quads, but it will rarely be correct for him to lay his cards unless we are playing with very deep effective stacks. Using two hole cards to make Quads (i.e. two cards of identical rank on the board) is also an important configuration in terms of implied odds since our Quads will be relatively disguised and one can frequently “cooler” any full houses our opponent may have. It does vary as per board texture. One issue is that there will be two cards of equal rank on the board, and our opponent may give us credit for having trips even if he never suspects that we might have Quads.

For example, we are holding 55 on 5-5-4-2, and our opponent makes some laydowns, concerned we might be holding a 5x. We also know that our opponent can never have a 5x himself due to the card removal effects.

Holding 55 on a board texture like 5-5-6-6 is extremely valuable, since our opponent will never fold the 6x overfull. In other words, the exact implied odds of Quads made with a pocket pair depends on the structure of the board.

Let’s take the example of playing four of a kind when a kicker is involved.

For example, your hand 4♥4♠4♦4♣10♦ would rank much higher than 4♥4♠4♦4♣6♦. However, if you possess a hand like K♥K♠K♦K♣4♦ it is surely going to rank higher than Q♥Q♠Q♦Q♣A♦ Even though the Quad Queens has an ace kicker which is much bigger than the Quad Kings which has a four kicker.In this hand ranking, you need to understand that it is the rank/denomination that is of prime importance.

So, tell us how would you play with four of a kind? Players usually have to use mind boggling techniques to achieve such high ranking combinations. Either you could slow down and understand the dynamics of your opponents or you could call for a check. This will help you analyse the possibility to get a four of a kind hand. If slow playing isn’t your thing, go aggressive and use your best bluff tactics that would help you complete four of a kind. Quads is a rare hand that usually gets players excited, but the real deal is that it is not the best possible hand in any poker game.

So, the next time you decide to grind this hand, remember that you must always consider which variant you are playing in, the texture of the board, other possibilities of opponents also holding quads etc. If you stay cautious, you could make the pot yours in no time. Four-of-a-kind is not an unbeatable hand, but it is a winning hand. It can be even more profitable if the player in Texas Hold’em has two of the four , making quads with the other two from the community cards.

What is four of a kind in poker?

Four of a kind or Quads is one of the strongest and rarest poker hands in a poker game.

What is the best four of a kind hand?

Who takes the pot if both the players have four of a kind?

It is quite rare that two grinders have four of a kind but it is not impossible. The player holding the higher quad wins.

How many four-of-a-kind hands are possible?

Which hand can beat four of a kind hand?

A straight flush and royal flush hand can beat a four of a kind hand.

Is four of a kind better or straight?

Although four of a kind hand occurs the least as compared to straight or flush, it is still the winner.

What are the odds of making four of a kind?

Can you win if you have four of a kind?

The player with Four of a Kind in Texas Hold’em, and in other variants, will win most of the time. The opponents getting something better than this hand are generally quite slim.

Can four of a kind beat a royal flush hand?

As per the poker hand rankings chart, Royal flush is the highest and best hand one can make.

Which is the strongest four of a kind hand?

If a player has all Ace cards, then they have the strongest four of a kind hand.