History of Poker and its Origin

Not more than a couple of decades ago, poker was considered almost an outlaw activity and now is a famous game that is enjoyed throughout the world. So what’s the journey of poker? How has poker history developed over the years?  Let’s understand the history of poker with an infographic to get a brief overview on how it grew to what it is today. 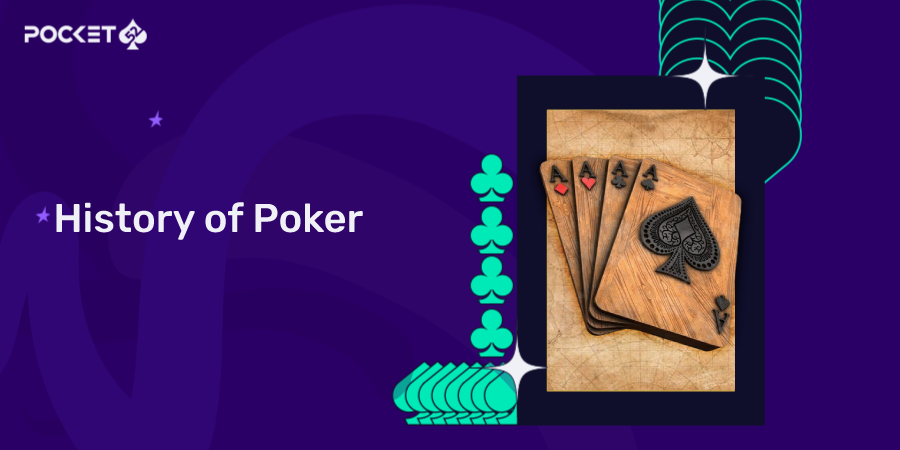 The game of Poker, a prevalent name worldwide, has an exciting history. Many poker enthusiasts playing innumerable versions of the game, such as the traditional games of Texas Holdem poker and Omaha poker, or video poker and draw poker, are intrigued by its origin.

With the advent of the 52-card deck, games like Solitaire, Blackjack, Teenpatti, Patience, and Poker originated. Of all the other games, poker became the champion of all card games and attracted the most players. Poker is now played by beginners as well as professionals in casinos and online.

If you are one of the avid poker players who cannot stop thinking about the game, it would be fun to know about its origin and history. So, are you ready to delve deeper in time and learn some interesting facts from the past to augment your poker knowledge? Read on!

Before coming to the poker game, it is also essential to know the origin of the card games. Card games, one of the most delightful pastimes for hundreds and thousands of years, were started in China before AD1000. Then, it entered the EU in 1360 with the oldest card game called the ‘leaf game’.

Poker began in the year 1829 in New Orleans. The French settlers played the game. One of the surprising things to note here is that they used a lot of bluffing in poker to win the bets in the game called ‘Poques’, which is poker today. This name of the game came from the Irish word Poca which means ‘Pocket’. At the same time, some say it is a German word – ‘Pochen’, which means to brag or bluff.

“All in”, a term commonly used in poker, meant the word – jam. It was derived when Don Chapo, the reputed poker player in the 1940s, would eat Strawberry jam sandwiches at the time of playing poker. He was known to put all the chips in when he ate a jam sandwich.

Joseph Cowell is a vital name associated with the game of poker. He reported that four players played one of the most valuable hands in 1829.

In 1837, another famous name in the field of poker called Hoyle, R.F. Foster found that this game of poker was being played in the US. Five cards were dealt to each player in that game, and the deck contained 20 cards. Since then, the game has spread like a rapid-fire. Then came a 52-card deck.

With the 52-card French deck:

Most poker developments happened in the 1970s when American casinos launched the World Series of Poker. Notable champions like Amarillo Slim, Johnny Moss, Bobby Baldwin, and Puggy Pearson developed various poker strategies and published books. The World Series of Poker was covered by the media and was telecasted on TV in 1973. This was the first televised poker event that took poker into the spotlight.

In the 1980s, poker became a part of popular culture as a recreational activity. It featured in Star Trek episodes, too and added to its popularity. In 1988, when Congress passed the Indian Gaming Regulatory Act or IGRA, casino games were legalized in India. Limit Texas hold ’em Poker became the most famous game. Seven card studs followed too.

In the 1990s, poker became a household name in the United States, especially in Atlantic City and New Jersey.

Poker’s popularity became exceptional at the beginning of the 21st century due to the advent of online poker games. The poker tournaments invited the attention of a wide range of audiences. Media coverage of poker events made the players no less than celebrities. Poker fans were found all over the world.

Interesting facts about Poker from the past

Don’t you want to know the fascinating facts about the world’s most famous Poker game? Here are the fun facts to know:

As you would know, Poker has been played for several years. It is projected that the game is going to grow for several years to come. As per the data from the World Series of Poker, there are more than 100 million people who play poker online. Poker has become a popular pastime.

Basic Rules of the Poker Game

Poker strategies to win the Game