One Pair Hand Ranking in Poker 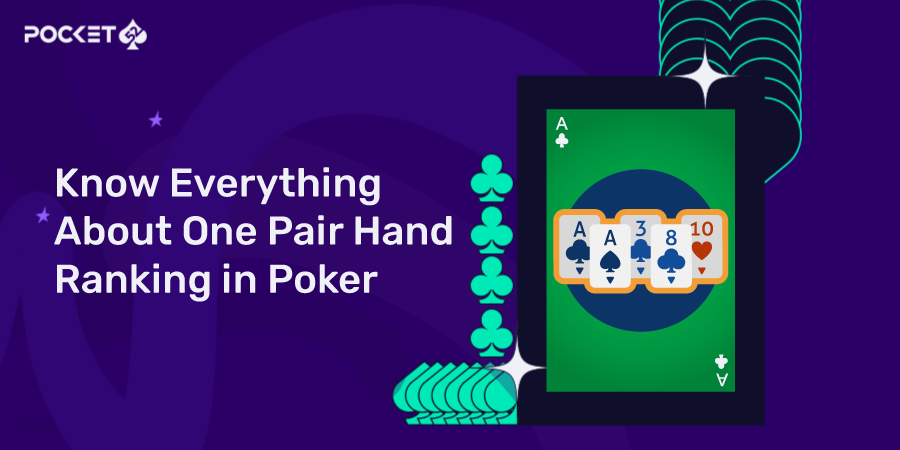 Before you go on to ace any game or master any skill, it is important to understand the basics, or in other words, the ABC of the game or skill in contention. One must know what are the basic rules of poker that need to be followed, and what are the technicalities to win the game. If we talk about poker, these technicalities may include hand rankings, odds of winning, the outs one holds, strategies that one can use among several others. We will discuss one of these components namely hand rankings.

The game of poker has 10 hand rankings arranged in order of their probability of occurrence from a deck of 52 cards. Each of these Poker hand rankings comes with its own set of strength, weakness, and potential to win. However, before playing even the best hand, one must first look at the probabilities, and complications of the hand in order to get the maximum value. In this article, we will help you understand everything that is there to know about one such hand – one pair hand in poker. We will talk about what it means, its ranking in poker, its probabilities, how to play the hand, along with some examples for detailed understanding.

What is One Pair Hand in Poker?

Not very difficult to guess from the name, a one pair hand refers to a five card wherein you have two cards with the same rank or denomination. In other words, when a player is holding a pair of equal rank cards, he /she is said to have a one pair hand in poker.

Now let us consider one more situation, where you are dealt pocket kings (KK), and the board opens to 9, 2, 4, Q, A. In this situation, your best hand is KKAQ9, you use both your hole cards and the rest of the cards from the board.

In such a case, the kicker comes into picture. In the above example, if a player with Q, 5 as hole cards, form the same one pair hand with fours on board, his/her best hand will be 44Q95. Here you will win because you have a higher kicker card, i.e., K against the opponents Q. Kicker is the highest supporting card or the next best card that a player has apart from his one pair.

In rare cases it might also happen that two players get the exact same one pair hand and the exact same kickers too. Since there are four cards of every denomination in a 52 card deck, it is possible that two players are dealt with the exact same pairs, and since their kickers are on the board, both have the exact same cards. Or it may also happen that all the five best cards are on the board and more than one player decides to use those cards to make their best hand if they have lower hole cards. In such cases the pot would be split equally among the players in question. There is no winner, and the players equally divide the pot.

The one pair hand ranks ninth among the list of 10 poker hand rankings. The ranking of this hand is much on the lower side. In most cases a one pair hand cannot win you the game, thus, players are not very excited to get a one pair hand. Experts suggest that it is easier to win a one pair hand in online poker than in live poker games. However, one must know and use the appropriate strategies.

How does a One Pair Hand Rank in poker?

Considering the fact that poker uses a standard 52 card deck, there are 1,098,240 one pair hand combinations that can be made using the 52 cards. Additionally, one can form 2,860 unique ranks of One Pair hands in poker.

Among all the various one pair hand combinations, one must always remember that the highest pair wins. Therefore, it is important to pay close attention to the rank or denomination of the pair you hold. For example, if you have 66853 and your opponent has 88653, the opponent wins since eight is higher than six. Hence an eight pair will be higher than a six pair.

Have a look at the following pair of hands. Can you correctly guess their ranks from the highest to the lowest?

Also remember in a one pair hand in poker the suits do not matter. The hand is wholly based on the value or denomination of the cards and all suits are treated equally.

Rules of One Pair hand in poker:

To sum up the above mentioned points, remember the following rules before playing a one pair hand in poker:

Probabilities of Forming A One Pair Poker Hand

One thing to always keep in mind, when playing any hand in poker is the probabilities of that hand. Let’s talk about the probabilities of forming a one pair hand in Texas Hold’em and in Pot Limit Omaha games. Texas Hold’em is played with two hole cards and five community cards. Every player is required to form the best five card hand using either both cards, a single card or none of the cards from your hole cards. On the other hand, Pot Limit Omaha, also known as PLO, is played with four hole cards and a player must make his best five card hand with compulsorily two and only two cards from his hand.

Since the five community cards open in a series of three and then one and one cards each known as the flop, turn and river respectively, let’s look at the probability at each of the stages.

Probabilities of forming One Pair in Texas Hold’em Poker

The Pre-Flop Stage: In Texas Hold’em there are 42,2569% probabilities of making a one pair hand pre-flop, given that since the board has not opened yet and random five cards will be drawn from the pack.

On the Flop: On the flop there is 28.6% probability of making a one pair hand of any one of your unpaired hole cards, because here three cards are already known.

On the Turn: There is 12.77% probability of making a one pair hand on the turn from any one of your hole cards, given that you hold unpaired hole cards.

On the River: On the river you are 13.04% likely to form a one pair hand with one of your unpaired hole cards.

Probabilities of forming One Pair in Pot Limit Omaha (PLO)

The Pre-Flop Stage: If you are playing a Pot Limit Omaha game, there is a 42.2569% possibility of making a two pair hand preflop since random five cards from the 52 card deck will show up on the board.

On the Flop: Here there are 49.95% chances of forming a one pair hand with either one of your cards given you have non-paired pocket cards.

On the Turn: On the turn, there is a 26.67% probability that you will form a one pair hand with one card from your unpaired hole cards.

On the River: On the river, there is a 27.27% probability of making a one pair hand with either one of your unpaired hole cards.

How to play a one pair hand in poker?

By now you must have observed that winning a one pair hand depends solely on the value of the pair. Especially in Texas Hold’em always play basis on the value of your pair. Smaller pairs like 22, 33, 44 have a higher chance of winning in a showdown against high cards, but they are also highly vulnerable, so always play cautiously.

Think carefully before you raise bets. Middle pairs like 77, 88, 99 are slightly stronger because they hold a bit of higher value, however, they too are vulnerable to a lot of combinations.

In one pair hands, pairs of the face cards can be like minefields. Why we say this, is because a pair of Jacks can feel strong, but many times leave you with a losing hand. They can be deceptive at times. However, that’s not the case with pairs of queens, kings and aces. If you have pocket queens, kings, or aces play for their value and maybe aim for two pairs or three of a kind then. If you have these, you can force out the small value card players by raising and betting. Once the players in the hand have reduced play according to the dynamics of the table.

Always remember that one pair hands are not very great hands, but they can win you pots or even a game if played well. Remember to always play for value here. Take time to read, evaluate and understand the table, the opponents, the value of your pair, your stack size, your opponent’s stack size, and the various factors involved before making any decision about playing the one pair hand in poker. Do not shy away from folding at any stage of the game if you feel that your pair is not strong enough for you to win. It will save you a lot of money.

What is one Pair hand in Poker?

A one pair hand is any hand that includes two cards of the same rank or denomination. In other words, any hand with two equally ranked cards is known as a one pair hand. For example, KKJ74, 22643, and so on.

What hand can beat one pair hand?

A one pair hand can be beaten by two pairs, three of a kind, straight, flush, four of a kind, full house, straight flush and royal flush. Since one pair hand ranks ninth, the above hands have a higher value than one pair and hence can beat this hand.

What is the best one pair hand?