How to Deal in Poker? 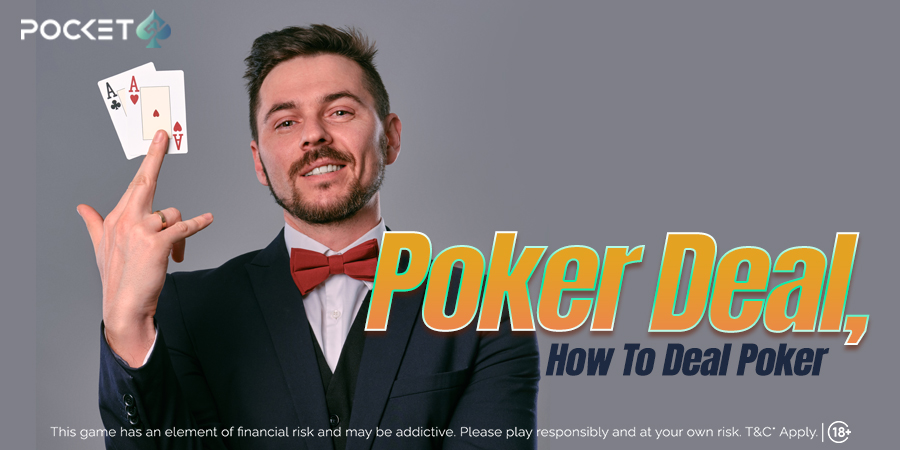 Poker dealers provide cards to the players and manage the play at the poker table, which is their primary responsibility. To excel as a poker dealer, you’ll need to hone a variety of characteristics and skills.

We’ll walk you through the steps of dealing and running a poker game.

Brief About the Poker Dealer

Keeping track of the cards, poker chips, and other game components is the job of a poker dealer. Dealing the cards, shuffling the cards, and chips are given out or taken away depending on what’s needed at the end of a hand. Dealing with harsh or abusive players, keeping an eye out for fraud, and ensuring that the game’s regulations are being followed correctly are all responsibilities of the poker dealer.

A dealer’s work entails a lot of shuffle and dealing. Because they must maintain the game running smoothly and correctly, they must perform these practices flawlessly. Generally, a dealer must shuffle the cards at least three times before cutting the deck, but this varies from casino to casino.

A person at the center of the table often cuts by placing a blank, coloured card in the deck. Next, the dealer flips it over and sets the deck’s top portion on the bottom.

What Does a Poker Dealer Do?

The dealer must give the correct number of cards to each player at the table, even if the rules differ from place to place. It all comes down to the type of poker played when determining how many cards are dealt.

No matter what kind of poker is being played, the dealer must make sure that the cards are dealt face down to the player so that the other players cannot see the cards sold to him.

To avoid giving away any of the deck’s secrets, the dealer must deal fast and accurately without disclosing any of the cards that have been dealt so far.

Dealers typically deal by taking one card at a time from the top of the deck while holding the deck in one hand. Afterward, the card is hurled at a player across the table.

How to Deal in Poker?

The deck is shuffled to introduce a random element to the game. A player’s ability to forecast the cards that will be dealt later could be compromised if the deck isn’t shuffled. Typically, a poker shuffle involves two riffles, a box, another riffle, and a cut. There are many alternative ways to mix.

2. Deal the cards to the players.

Distribute the cards to the participants. Dealing is typically done in either an American or European way. Depending on your attitude or the makeup of the team, you can alter your playing style:

3. Burn and turn the cards

The top card of the deck should be discarded while playing a community card game like Texas Hold ’em. You should likewise turn over the fourth of the five cards dealt with by the community. In the end, the players can utilize this card to make up their final hand of cards.

Keeping track of side pots and verifying players’ bets and raises is the dealer’s responsibility. You can speed up the process by using a side pot calculator. Closely read the poker hands, and pots should be pushed toward the winner at the game’s end.

Tips for Dealing in Texas Holdem

How to Deal Poker Professionally?

The dealer delivers the first card to the person to their immediate left, which is the most basic rule. The cards are dealt one by one, face down, to each player. Then they are distributed in a clockwise manner. The procedure is continued until each participant receives the correct amount of cards. Depending on the poker being played, players receive anywhere from two to five cards after each hand.

This means that in a home game, the cards must be dealt out by a single person. The movement of the dealer button is used to signify who will play first and last during the rotation at a casino or on poker websites. On one hand, the person with the dealer button is the last to act.

In pre-dealt betting, round the players are most active. Antes and blinds are two of poker’s most common “forced” bets.

Before the hand is dealt, all players are required to place an ante.

Blinds are also forced bets, but only for the two players seated on the left to the dealer.

The person closest to the dealer is obliged to make a small blind, while the player sitting on their left is forced to make the big blind (twice that wager) (double that wager). It is mandatory for all other players to either match or exceed the large blind for that hand to continue.

Keep in mind that not all varieties of poker require both antes and blinds, but players are typically forced to pay at least one of these bets before each hand in most cases. There is no set quantity for these bets; it varies according to the game and the poker room. It’s more common to see it rise during a poker tournament.

The number of players at a poker table will decrease over time in all games. The dealer will exclude the players who leave the table from the betting round. Players who do not remove their chips before leaving are considered active. However, those cards will be discarded if that player does not return in the allotted period. These players will still be forced to make any bets (antes, blinds) if they were at the table the entire time, as they are considered active participants.

Poker dealing can be a lucrative career path. Keeping the game moving fast and effectively while juggling several roles is critical to winning. While no one is flawless, with time and effort, you develop a good reputation among the regulars and earn larger tips.

Till then, play online poker at Pocket52 to gain experience.

1, What is a poker dealer called?

A croupier or dealer is a person who acts as a steward at a gaming table, distributing bets and winnings to the players. Casinos often use croupiers as part of their workforce.

2. What does the “dealer button” mean?

3. How is the dealer decided in poker?

In poker tournaments, each player has an equal opportunity to become the dealer since the positions are randomly selected.

1. What is Muck & Auto Muck in Poker? – Pocket52
2. “All” you need to learn “ All in” Poker
3. Top 12 Poker patterns to make you a better player
4. 6 Poker Cheat Sheets that will make you a Poker King!
5. Poker Charts Every Poker Player Should Memorize