Jhansi is an archaic region— a region where parents still want their kids to either become engineers or doctors. But it is also the city known for its heroic tales of revolutionary patriotism. It is from this part of the country, the winner of Pocket52’s Pocket Kings Tournament, Himanshu Dwivedi comes from. 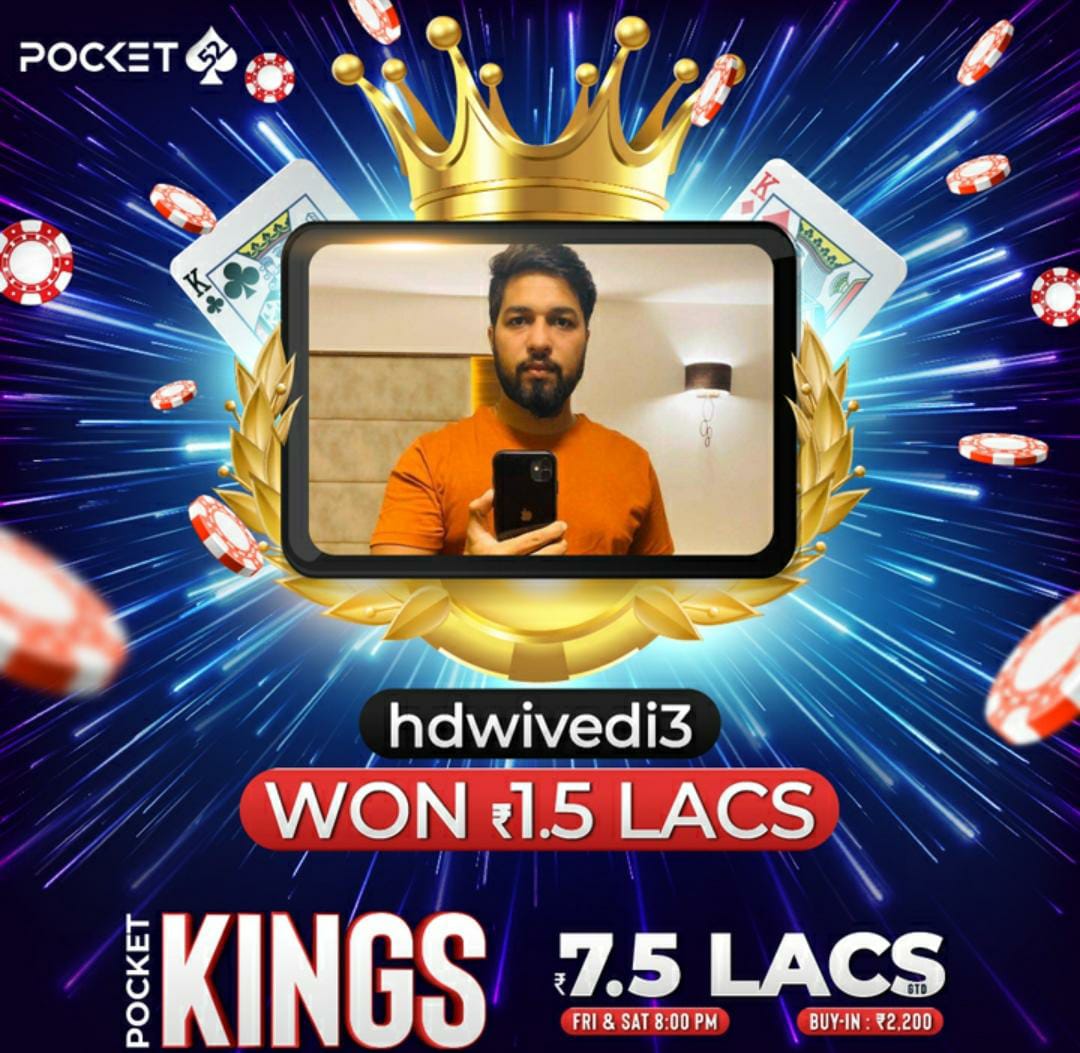 “Recently, I won INR 150000 and shipped Pocket Kings Tournament at Pocket52. Like the world says, behind every successful man there is a woman. My case is no different. I have many women who have supported me, guided me, and most important of all trusted in my skills. My sister and girlfriend are the two most important of them.” says Himanshu.

Back in Gurgaon, during his job days, Himanshu met Sharad Rao, a very well-known poker player in the country, and also, Himanshu’s first poker coach. Himanshu was highly influenced by Sharad’s lifestyle and wondered if he could play poker professionally someday. He thought how great it would be if he can make good money like Sharad and can get rid of his mundane day-to-day job. Himanshu continued to follow Sharad and finally got some guidance on poker strategies for beginners. Sharad also introduced him to a few members of IPPA. A few books that helped Himanshu in his early days of playing poker are Harrington on Hold ’em and Morden Poker Theory. He recommends the same to new players. Himanshu won INR 1.25 Lacs within the first three months of his online poker playing.

This automobile engineer with a handsome salary had to quit his job when life decided to give him a rough ride. After the sudden demise of his mother, his sister suffered from severe depression. It was getting difficult for her to live all by herself. Himanshu decided to be the strong one here and went to Indore to live with his sister.

Himanshu quoted, “I thought I will get some job in Indore as a lot of automobile companies are based in the city. But finding a decent job was a nightmare. That’s when I decided to play poker professionally.”

The first 4-5 months were not very significant for Himanshu. But he managed to win 12 Lacs in the first year of his professional poker journey. He met Rishab Malik and followed his game. Also got in touch with two brilliant poker players from the states, Maria Kirloskar and Amanda Hedrick (USA). Himanshu says, “I interacted with them on Facebook, they both helped me with game strategies. Suggested I read, ‘Mental Game for Poker’, which changed my mindset towards the game. And step by step, I moved towards glory and money. I am thankful to them. Initial coaching is essential to get the right path.”

Soon after, Himanshu started playing live and got an invitation to play at the Indian Poker Championship, where he won INR 3 Lacs. Himanshu has a quest to learn and grow continuously, hence he was looking for his next poker coach. Alok Ranjan, who is one of the best poker coaches in India, agreed to mentor Himanshu. He won 20.5 Lacs in the first three months of his mentorship. Himanshu won 50+ Lacs in the last two years. “I do not regret leaving my job. It is double my salary. For the first 10-12 months, I did not tell my family that I am playing poker professionally. They always thought it is my hobby. But when I declared the news, like any other Indian family, they were unhappy about it. I took a stand for myself, and on my game. My girlfriend, Monish Jaiswal, supported me in this downtime, and here I am, living my dream. My passion is my profession”.

So, this was about Himanshu Dwivedi, winner of Pocket52’s Pocket Kings Tournament, who believes even though a huge uncertainty surrounds this game, still, patience, persistence, passion, and focus are the key to making it big.