The poker universe is vast. Thanks to the fun and excitement element of the poker game had led to newer and innovative versions of the game across the globe. Although the original game of poker is intriguing enough, the other variations are equally fascinating. As the popularity of the game began to spread far and wide, people began inventing different versions of the game with their own twist. If you travel the world you will find countless such versions in every nook and corner. One such version is Badugi poker. 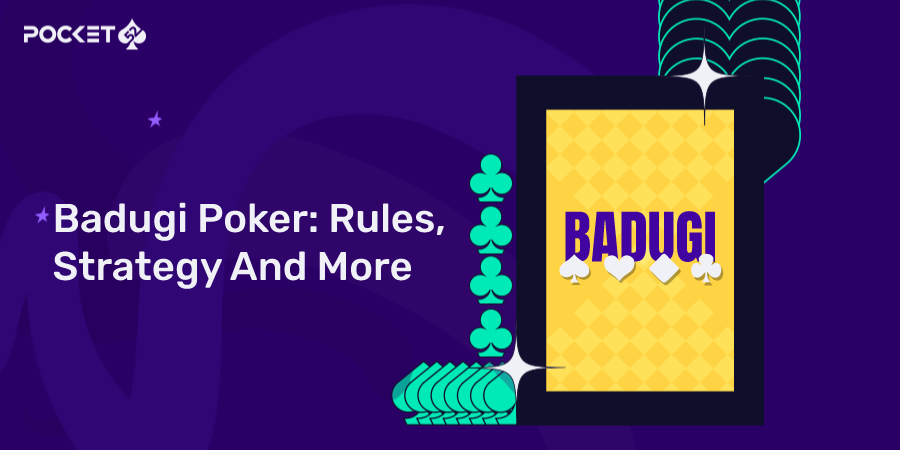 What is Badugi Poker?

Badugi poker is also known as badougi, paduki or padooki. It is a draw poker variant identical to triple draw, having hand-values similar to lowball. In other words it is a combination of triple draw and lowball. The structure of betting and the play is similar to the traditional poker game. It uses blinds, however, while standard poker games use a minimum of five cards, in badugi poker, the players’ hands include only four cards at any one time.

The game involves three drawing rounds. During each round, players can trade maximum four cards and minimum zero cards from their hands and replace them with new cards from the deck. The aim is to make the best badugi hand and scoop the pot. Just like traditional poker the aim is to win money in the form of pots. At the end of the hand, or showdown, the player with the best badugi hand wins the pot. Badugi is usually played in card rooms across the world. It can also be played online. Like traditional poker has WSOP, badugi poker does not have such a designated event of its own, however, it is featured in the Dealers Choice events as well as in the Triple Draw Mix at the WSOP.

The exact origin of the game still remains a mystery. Some reports suggest that this version of the game was first played in the 1980s in Winnipeg, Canada. Back then it was called Off Suit Lowball in the back room of pool halls and poker clubs. However, several Korean players claim that it was played in South Korea in the 1980s. The term ‘badugi’ means ‘black and white spotted dog’ in Korean. The Korean name for the game of ‘Go’ is ‘baduk,’ which is also derived from the same word.

The betting rounds start with the player on the left of the dealer. The action then moves clockwise around the table. Each player is dealt with four cards which are facedown cards, or hole cards, one card at a time.

Once all players on the table have received their respective four cards, the first round of betting begins with the player to the left of the big blind. After completion of the betting round the first drawing round begins.

The player on the dealer’s left begins by announcing how many cards he/she would like to give up from his hand and he/she receives new ones in return. The dealer deals the rest of the cards to the player at once and moves on to the next player.

The players have the choice to discard no cards. This is called standing pat or rapping pat. After all players have received new cards, they begin the second round of betting, again beginning with the player to the left of the dealer.

This betting pattern repeats until one of the following occurs:

Just one player is left, and the rest have folded.

The players have finished the betting round post the third round of drawing.

In order to understand any variant of poker, it is important to first know the hand rankings. Here are some possible Badugi poker hands that will help you win at the game.

In Badugi poker there are no straights. Any four cards in a row have no value, and against traditional poker, Aces are always low. If a player is holding two or more cards of the same suit, the lowest value card is considered. A similar rule applies for paired cards. If you have a pair, only one of those cards count.

These hands are ranked from best to worst follows:

Four cards that are unpaired and have different suits.

If more than one player is holding the Badugi, the player with the lowest high card wins.

Three cards that are unpaired and unsuited cards, accompanied by a fourth card that pairs or is of the same suited as one of the other three cards.

Two unpaired cards having different suits, with two other cards that either pairs or is suited with at least one of the other two cards.

This is a two-card hand of 4-3 since it has both a pair as well as two diamonds, therefore it discounts the 5♦ and one of the 4.

One card hand is the worst possible hand. It includes 4 cards of the same suit (or sometimes four-of-a-kind, although it is extremely rare).

If there are more than one player who are holding the same hand-type and highest card, then the player who has the lowest second-, third- or fourth-highest card wins the pot. In situations of breaking ties, discounted cards are never used.

Just like any other card games with a predetermined order of play, the position at which the player is seated is also crucial in badugi strategy. Players who are seated in later positions and are last to act often have more opportunity to bluff as they are able to observe the actions of other players and then act accordingly. Additionally, players in later positions are able to analyze the strength of their hand more accurately since they get to observe the actions of other players. Generally, people choose to play Badugi tighter than other draw games. This means they tend to fold more hands pre-draw. This is advised to anyone playing badugi poker.

While drawing one card, there are only ten other cards that will complete the badugi, the cards of the fourth suit that do not pair with the other three cards. Any player holding a badugi hand can use this to estimate odds. As an example, a player holding an 8 high hand, knows that most 5 cards (A till 8, less the three pairs) will complete an opponent’s hand.