To win in the game of real money poker, before you learn the game’s strategy, you should be well versed in the poker terms Now that you have decided to acquire the master skills of the game, let us take you through poker terms so that you can talk the talks. Pocket52 is breaking down all the essential poker terms in-depth, to navigate you through the game vocabulary. 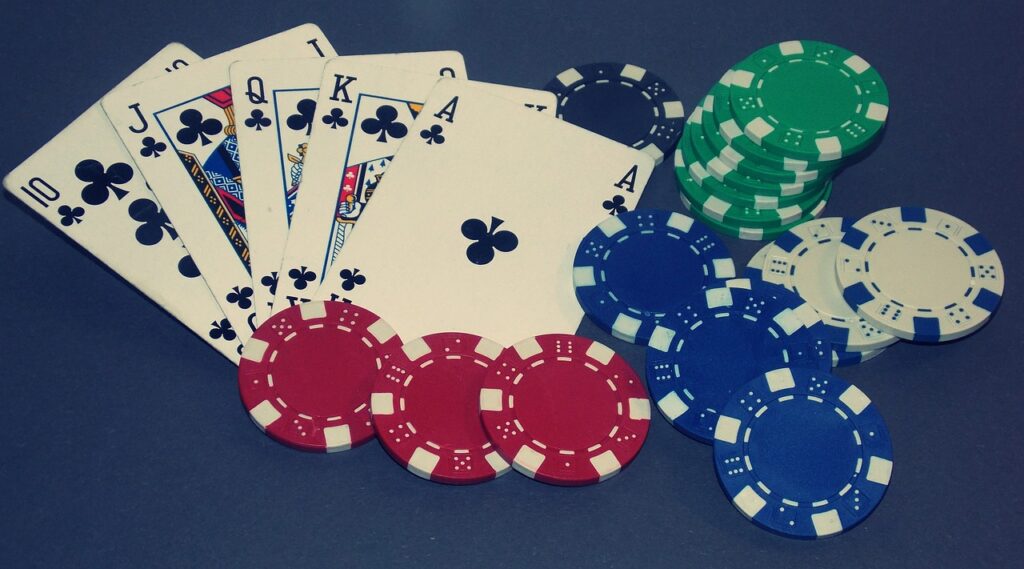 In a table stakes game, when a player raises or calls the bet with all their chips, it is called all-in. In a table stakes game, once a player runs out of chips to bet on, a side pot is created which they cannot win. However, they are still eligible to win the main pot up to the point of their wager. If multiple people go all-in during a single hand, numerous side pots may be created.

Ante is a small forced bet contributed by each player before the deal. Antes are commonly used in tournaments along with blinds, while general Hold’em games do not have an ante.

In certain games and tournaments, players can buy additional chips between hands and add them to their stack, irrespective of the size of their current stack.

The total amount of money that players set aside exclusively to play poker is known as their bankroll.

The larger of the two blinds, which are a full first-round bet, are typically used in Hold’em poker.

When a player uses the lowest card from the community cards to make a pair, it is known as the bottom pair.

A bluff is a single or series of cunning bets that are made with a hand that is believed to be weaker than the opponents. The primary intent is to induce a fold from at least one opponent who holds a much stronger hand.

A bad beat is a scenario where a largely weak hand beats a favored hand after getting a great card in turn or river. Simply, the winner of a bad beat shouldn’t have been in the race to win, but due to the luck gods smiling on them they manage to get a card that changes the course of the game. Don’t look out for examples. You’ll have plenty of them in your online poker career.

A calling station is a player who calls a lot, doesn’t fold, but doesn’t raise much as well. This is the ideal target for good poker players as they increase the pot often and lose out on the majority of hands.

To not bet on a particular hand, with the option to call or raise the pot in the betting round later on. The opportunity to decline a bet using a check is only open when there are no bets in the current round. If all the players decide to check and not bet, then the round is considered complete.

While the original meaning of the phrase is fixing a deck with the intention of cheating in a game, a cold deck also means losing a substantial pot with a strong hand to another player with an even stronger one.

Community cards are presented in the middle of the poker table face-up by the dealer and are shared among the active players in the game. Major poker variants that use community cards include Hold’em and Omaha.

After a shuffle, cut or cutting is the splitting of the deck into two halves and moving the bottom half on the top.

An opaque card is placed at the bottom of the deck to ensure no players can see the bottom card.

The player in the game who deals with the cards (theoretically in some games) is known as the dealer. However, in a professional casino poker game or an online poker game where a dealer is present, a player is identified as the dealer as the blinds and bets are to the left of the dealer. After each hand, the dealer position is shifted to the next player in a clockwise manner.

Used as an insult, a dog is a player that is losing to someone else in a hand.

In Omaha, if a player holds two cards of one suit and two cards of another, it is referred to as double suited.

Also known as Under the Gun, the player to the left of the big blind is known as the first position.

Instead of playing further in the hand, the act of giving up your cards and losing all the money bet so far is called fold. Players often fold when they believe that the chances of them winning are not substantial.

The first three community cards were dealt on the poker table face-up. These cards are dealt with after the first round of betting is complete.

A fish or poker fish is a player who plays poorly, bets on almost every hand without thinking, and often lose. Want to know more about poker fish and other aquatic animals on a poker table? Then you can read ‘Poker Fish vs Poker Shark – Who are you in a Poker game?’.

It refers to the amount of equity a player will gain with the chance that their opponent folds their hand.

A tournament or event with no entry fee.

A full ring is a poker game with a full table of nine or ten players.

A full house is a five-card hand that consists of three cards of one value and two cards of another. For example, a hand with three aces and two queens will be considered a full house.

Four of A Kind

Also known as quads, if a player has four cards of equal value in their five-card hand, it is known as four of a kind.

A poker player is known as a grinder if they play continuously to make a steady profit rather than a single big score.

A gutshot is a hand with four cards needed to make five cards straight, but missing the middle card.

The hand may refer to the private cards you are dealt with in a game or the game that happens between one deal to the next.

During a poker tournament, hand-for-hand is a situation where tables ensure each table players the exact number of hands until the bubble bursts.

Private cards are dealt with a player face-down by the dealer. The term is primarily used to describe the first cards dealt with players in Texas Hold’em Poker and Omaha.

Hold’em or Texas Hold’em is one of the most popular poker variants. Each player is dealt two private cards, known as hole cards, with five community cards dealt face up in three stages, the flop, turn and river.

A form of a poker game where a player can bet any amount of poker chips (from their stack) whenever is their turn to bet in the hand. On the contrary, limited poker has certain restrictions as to the number of chips one can bet in a hand or a game.

One of the most famous variants of poker is where each player is dealt 4 private cards and 5 community cards.

A hand that has two cards of the same value and three extra cards.

The number of players playing at a particular casino, a poker site, or platform at a given point. Poker players prefer high player liquidity as it translates to better games, bigger pots, and more tables to choose from. Want to know more? Then read ‘How Pocket52 is acing player liquidity giving its players more tables and more fun!’

Pot Odds are the ratio of the total pot up until the bet, and the size of bet you must make to continue. Pot odds are substantially used to decipher which pots will be profitable for the player.

If a flop contains cards with three different suits, it is termed a rainbow. Since it has three unique suits, a flush cannot be made on the turn. In some games, a rainbow is also associated with five community cards that have no more than two of the same suit, thus rendering a flush impossible.

The amount that the house takes out of every pot. This is the cardroom’s income and ensures capital stability for the organizers.

The fifth community card was put face-up on the poker table. Also called ‘fifth street’ in many games, people who lose on the river card are often annoyed with the phrase ‘He drowned in the river.

If a hand consists of A, K, Q, J, and 10 of the same suit, it is known as a royal flush and is considered the best poker hand.

Selling a hand includes betting less and carefully on a strong hand to lure in more players to call or raise the bet without any suspicion, to increase the pot. This is to ensure bets, in a scenario where the players would not have called a high or maximum bet.

The second most powerful hand in Hold’em, a straight flush consists of five straight cards in the same suit.

A straight hand has five cards of consecutive value, irrespective of their suit.

A poker shark is an excellent poker player who strategically plays each hand, often folding bad hands and analyzing not only their bets but also their opponent’s

A satellite or a satellite tournament is a small tournament, which often holds an invitation to a major tournament as one of its prizes.

A poker play in which a player that has predominantly called and checked, suddenly takes the lead in betting.

Three of a Kind

Often known as trips, a three-of-a-kind is three cards of the same value with two side cards of different values.

Also known as ‘fourth street’, the turn card is the fourth community card put face-up on the table.

A five-card hand has two sets of pairs with a side card.

A hand or a player who is statistically not favored to win a pot or a game is known as the underdog, or dog by many poker players. In your poker career, you will see many underdog players who win on the river card to take the pot.

When the player’s hole cards make a pair, it is known as wired pair or a pocket pair. There are a lot more poker terms that often make their way onto the poker table, but the glossary mentioned above will enhance your game. Learn more while you play more as poker isn’t a difficult game to learn, but a sport difficult to master. May the flop be with you. Sign up at Pocket52 and get a welcome bonus on India’s first and biggest Cryptographically Secure Poker Network.