Most people think of Texas Hold’Em as the only type of poker variant. We are here to debunk the myth. Texas Holdem is just one of the most popular poker types. There are other types of poker variants played in this world.

As decades ago players used to master the game only with the cards in their hand on different social occasions only, and different types of poker were born from there. But as the time has come, you can still try other types of poker variants with a click of the mouse. 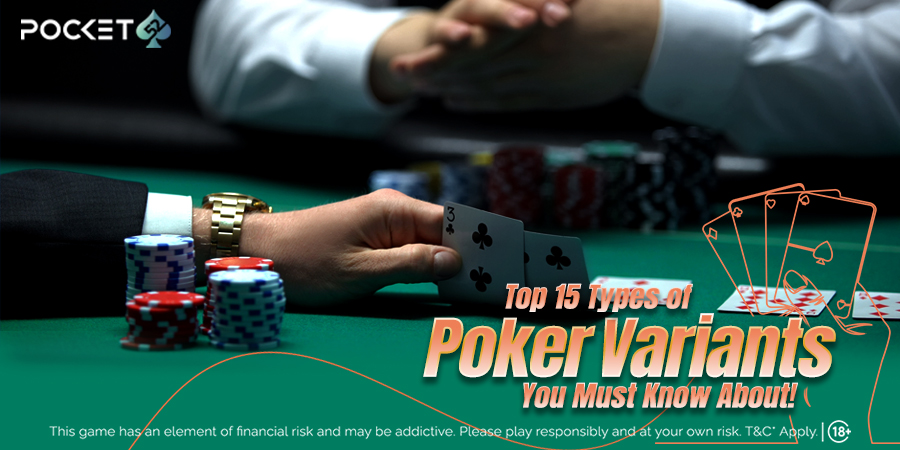 We’ll take you on a tour of the various types of poker variants.

No-Limit Texas Hold ’em Poker has been the most popular game form since the early 2000s. Because of how simple it is to play, this is one of the few varieties of Poker that has become too popular in recent years.

It is possible to play Texas Hold ’em Poker in various ways. Different betting limits are a frequent starting point for analyzing Texas Hold ’em games. Poker betting regulations and raising the stakes may be found in all varieties of Poker. As a result, it should come as no surprise that the discrepancies in betting limits impact the game of Poker. Hold ’em games are exciting because of their unique betting structure.

The Omaha Hi type of Poker is the second most popular in the poker world. In Omaha poker, the highest-ranking hand wins the full pot after each round. Pot-Limit Omaha (P.L.O.) is the name given to Omaha Hi because it has a fixed pot limit.

This poker variant is much like Texas Hold ’em Poker, except for one minor detail like a fixed limit. At the beginning of each hand, each player receives four cards instead of two. As previously, these players must continue to use five cards to construct poker hands. Each time they play, they’ll have to use two of their four-hole cards and three of their five communal cards. Having more cards at the start of each round makes it easier to create a strong hand.

There are several similarities between Omaha Hi and Omaha Hi-Lo poker games. The pot is split evenly after each hand, revealing the game’s best and worst five-card hands. Different combinations of hole cards may be used to reveal the highest and lowest potential poker card ranks in a game of Poker. There are a few requirements to be the player with the highest cards.

Omaha 8-or-Better is another name for this sort of poker game variant. A hand with five cards graded eight or below is known as a “five-card draw.” On the other hand, the straights and flushes are utterly worthless in this kind of Poker. A-2-3-4-5 combination is the most likely lower hand, while 8-7-6-5-4 is the most likely high hand. Observe that the lowest hand is listed from the highest position.

If you’re a fan of Omaha, this is the game for you. Have a seat at the table for the game of five-card Omaha. Instead of the regular four-hole cards, players are dealt five in this kind of Poker. However, players will still need to employ two of their hole cards and three of their community cards to get the greatest possible hand. One additional card has also made it simpler for players to develop and produce strong playing hands because of the inclusion of another card. Despite this, the pot-limit format will be used for the game. Conversely, a no-limit tournament may be possible under certain circumstances.

None can do much about how a player is dealt the cards in this version of Poker, but you can use a little technique! Make the finest possible five-card hand.

First, everyone is given five cards, and the betting begins. To go to the next round of betting after placing your wager, you may swap up to three cards before placing your next bet. After that, the winner is determined by whose hand is the strongest among the remaining players.

It’s a simple game, but players frequently attempt to see if they can get an edge by gauging their opponents. Your opponent’s hand might be revealed by how many cards they choose to draw in their first round of betting. They may be bluffing in the hopes that you’ll fold.

A decade before Texas Hold ’em became a worldwide phenomenon. This was the dominant poker variant. In general, it’s considered more difficult since there’s more to it, and it takes more talent to pull off. There are no flip or community cards in seven-card Stud, which has two to eight players. With two cards face down and one face-up, the game begins.

Seven cards face down, and four face up are given to you, and you must pick the finest five-card combination. During a hand, your opponents must expose part of their cards to you. This is done after the last round of betting. The player with the best five-card hand out of the seven dealt takes home the prize.

The ranking system of Badugi is similar to that of conventional Poker, with the exception that aces are now low-value cards rather than high-value ones. Instead of five cards, the dealer deals four to each participant, and then a betting round starts. Once the first draw round has begun, each player may draw up to four cards simultaneously. Next comes the second round of betting, followed by a fourth card draw and the third round of betting. A last round of betting precedes the showdown and is followed by the final draw. The person with the best poker hand out of their four cards is the winner.

The dealer deals each of the two to four players 13 cards at the start of the game. Each player’s cards are divided into two sets of five cards, with one set of three cards. Chinese Poker gives each of these hands a name: the three-card hand is called the front, while the two five-card hands are named the middle and the rear. The idea is to have the lowest-ranking hand on the front and the highest-ranking hand on the rear. The player places their cards in the following order on the table:

Each player makes a statement about whether or not they are playing their hands. If this is the case, there will be a public announcement of their upcoming royalties! (the group decides these units before the game). Participants receive points based on the cards they reveal, and the winner is awarded royalty units.

These games, such as Texas hold ’em, are a variant on traditional Poker and require the dealer to distribute cards to each player. In addition, community cards are on the table that has been dealt face-up. The communal cards and the players’ pocket cards are combined to form a single hand for each participant.

It is a version of regular Poker that enables players to trade cards, typically up to three cards, with the dealer after receiving their initial set of cards. The participants then form a hand by combining the new cards with the existing set.

It is a variation of Texas hold ’em with a few key differences. Each player starts with a hand of three pocket cards, and after looking through them, one of them is discarded. So the first betting round begins. Afterward, the rules of Texas hold ’em apply. The Crazy Pineapple Poker variant is identical, except that the players keep all three of their pocket cards until the round before the dealer gives the fourth card, also known as the turn card. Lazy Pineapple Poker is a variation of Pineapple Poker that doesn’t need a player to discard a card until the dealer flips over or deals the river card (the final card of five community cards).

Before a betting round begins, the dealer hands each player five face-up cards. After that, the first of three drawing rounds starts, in which each player may exchange cards from their hand with those dealt by the dealer. There will then be a second round of betting and a second drawing. After then, there will be a final round of betting, followed by the third round of drawings. There are two ways to win in a 2-7 triple draw poker game.

HORSE is the most prevalent mixed game that incorporates five different poker disciplines. In addition to Texas Hold ’em and Omaha, the rotation also includes Razz and the two varieties of Stud, one of which is Stud Hi/Lo. It is common in live games to play this game for huge bets. Horse poker is one of the few games that have appeared in the World Series of Poker. Playing all five forms of Poker in one sitting requires players to be aware of the regulations.

Short-deck is another variant of Texas Hold ’em. Most high-stakes cash games and tournaments now include short deck poker. The rating system is a little different from the typical poker ranking method. Full house poker loses to flushes in this variation, as the twos and fives are mysteriously omitted from the deck. Short-deck Poker, as a result, is played with a deck of 36 cards.

With fewer cards, players have a higher chance of quickly putting up a solid hand. However, keep in mind that your poker opponent has a similar edge. In addition, since there are fewer cards in play, your opportunities to get better variant cards are almost limitless.

These are some different variations of Poker that have received love globally, be it online or as a card game. It’s good to master one type of Poker. But if you don’t want to feel bored while playing the same game every time, try other variants. Don’t forget the main reason why this game is played! Enjoy gaming!