Two Pair Hand Rankings In Poker – All You Need To Know 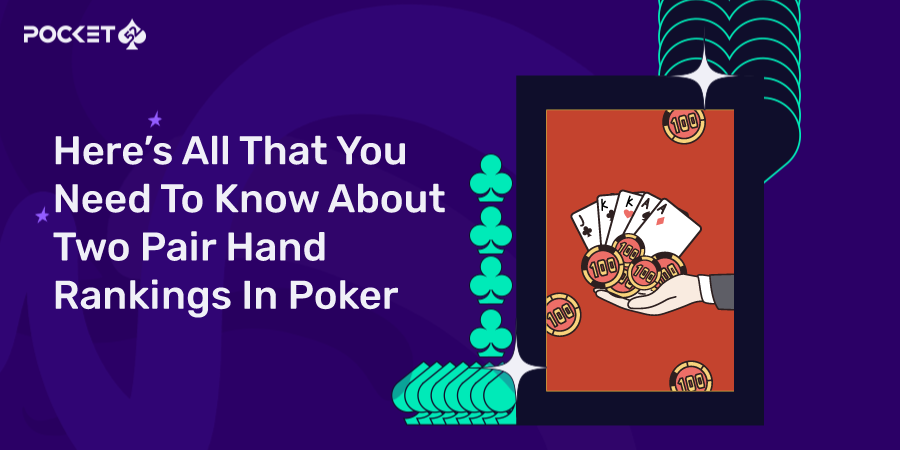 Whenever you start playing poker, there is one thing you will come across several times. That is ‘Hand rankings.’ And rightly so, because hand rankings are the fundamental elements of the poker game that define a win or loss in the game. What best five card hand you make, how you play it and ultimately what hand of the opponent shows.

The game of poker has ten hand rankings that are ranked on the basis of their probability of occurrence. A royal flush (10 to ace of the same suit) ranks the highest, while a high card ranks the lowest. If you have a royal flush, you are definitely winning the hand, however, if you have a high card hand, you are probably going to be beaten by several other strong hands and the probabilities of you winning are very low. All the other hands in between the royal flush and high card, come with their own set of weaknesses and strengths. Thus, one must understand the value and probability of each hand before playing it.

What is Two Pairs?

One can easily guess from the name, that two pairs is any hand that has two pairs, each pair of the same rank in the five card hand. It is an easily identifiable hand, and it ranks eighth on the poker hand rankings. When a player has two cards of the same rank it is known as a pair, but if a player has two such pairs, each of them having a similar rank, the player is said to have a two pair hand.

For example, in a Texas Hold’em game a player is dealt with 7 and 4 as hole cards. The community cards show A, 9, 4, 2, 7. Here the player’s best five card hand will be 7744A. The player has a pair of sevens and a pair of fours. Hence, he/she has two pairs. The ace card will be the kicker that supports the two pairs.

There could be one more instance of a two pair hand. Say you have KK as your hole cards and the board opens to 6, 2, 9, 6, 4. Here you already had a pair in hand. Another pair fell on the board, further strengthening your chances of winning as you know, you have two pairs to play for.

In the above examples you used both your hole cards to make a two pair hand. But there could be another instance where you have 8 and 2 as hole cards, and the board shows 7, A, 8, 6, A. In this case you form your best hand using the eight in hand, and the remaining stronger cards on board. Your hand would be AA887. Here you discard the deuce in hand because it is lower than the other cards on the board. You use your right to form one pair, and another pair of aces is already on the board.

However, have you thought that there could be a situation where two players form the exact two pair hands? Though the chances may be less, there is a definite possibility and has been seen on several occasions during poker games. Say for instance, take the above example of the AA887 hand. You had one eight and another one fell on the board, which was a common card. Similarly, your pair of aces are also on the board, which means other players can also use it. If another player holds 8 and K, his best hand would be AA88K. Who would win here?

Your opponent with AA88K would win the hand. Why? Because even though you both share the same two pairs, his/her K kicker comes to his rescue. If the two pairs are the same the kicker would come into the picture. Here your kicker is 7, whereas he/she has a K. A king card is greater than a seven and hence he/she wins with a higher kicker.

Now let us consider one more situation. Let us assume your opponent had 8 and 3 as his/her hole cards. Now his best hand on the above-mentioned board of 7, A, 8, 6, A would be AA887, since his three is smaller than the seven on board. Now here’s the catch. Your best hand with 8 and 2 whole cards was also AA887. Here the two pairs are same as well the kicker is also the exact same. Who would win in this case? Think, think!

In such a scenario, the pot that has been accumulated would be split equally among both of you since it was a tie between both. If the total value of the pot was 10,000 chips, both of you would receive 5,000 chips each.

The best possible two pair poker hand that one can possibly make is a pair of Aces and Kings with a Queen kicker, i.e., AAKKQ. Also remember that suits do not matter in a two pair hand.

How is Two Pair hand ranked in poker?

If you look at the overall hand ranking that has 10 hands, the two pairs hand ranks eighth. It is greater than one pair (a hand that includes just one pair of the dame denomination and three highest supporting cards) and high card (the highest card among the five random cards), both of which rank ninth and tenth respectively. A hand that can immediately beat a two pair hand in ranking is three of a kind, which ranks seventh.

Poker uses a deck of 52 cards and hence, one can form a spectacular 123,552 two pair poker hand combinations. Additionally, one can make 858 unique ranks of Two Pair hands. A two pair hand is by the highest pair first and then by the second highest pair, followed by the kicker as the fifth card.

Can you guess which of the following two pairs poker hands rank in what order?

Here AAQQJ is the best hand, with pairs of aces and queens supported by the jack kicker. Hence hand ‘C’ would rank first. It would be followed by hand ‘A’ on the second spot. Even though this hand has the same pairs (AAQQ9) as hand ‘C’, the nine kicker would rank lower than the jack. Then comes hand ‘B’, i.e., KKJJ9, with a pair of kings as the highest pair. Hand ‘E’ would come next as its highest pair is a pair of sixes (66338). The lowest among these would be hand ‘D’, whose highest pair is a pair of threes (3322A).

What Are the Probabilities of Making a Two Pair Hand?

Probabilities of Forming a Two Pair Hand in Texas Hold’em

In Texas Hold’em every player is dealt with two hole cards each, and five cards are revealed on the board as community cards. These community cards open up in three stages, firstly the flop, where three cards are revealed, then the turn reveals one card, followed by the river which also reveals one card. The community cards are common cards shared by all the players, while the hole cards are unique to every player. Each player is required to form the best five card hand using both or none hole cards along with a combination of board cards. Here are the probabilities of making a two pair hand at each stage in Texas Hold’em.

The Pre-Flop Stage – In Texas Hold’em there is a probability of 4.7539% of forming a two pair hand preflop, given that randomly five cards are picked from a deck of 52 cards. Preflop no cards are displayed on the board yet. All you know is your two cards, hence the probability is relatively high here.

On The Flop – If you are already holding a pair in hand, i.e., if you are dealt with a pocket pair, your chances of forming a two pair hand on the flop are a good 16.7%. Which means there is a 16.7% probability that one more pair shows up on the board to complete your two pair hand.

On The Turn – If you have a pocket pair in hand. Your probabilities of forming a two pair hand on the turn are 19.15%.

On The River – Your probabilities of forming a two pair hand with pocket pairs on the river are 19.57%.

Pot Limit Omaha or PLO is a variant of poker wherein, each player is dealt with four hole cards each. Just like Texas Hold’em , five community cards are revealed in three stages, namely, flop, tun and river. Every player must make the best five card poker hand by using two and only two of his/her hole cards and three cards from the community cards. Given these rules, here are the probabilities of making a two pair hand in PLO at different stages.

The Pre-Flop Stage – Given that randomly five cards are selected from the deck of 52 cards, the probability of making a two pair hand is 4.7538%.

On the Flop – There is 16.7% probability of making a two pair hand on the flop if you hold a pocket pair.

On The Turn – If you are holding a pocket pair, there is a 19.56% probability of forming a two pair hand on the turn.

On The River – On the river, you are 20% likely to form a two pair hand with a pocket pair as hole cards.

How to play a two pair hand in poker

Flopping a two pair hand, or even completing the two pair hand on the turn and river can become a little overwhelming at times. However, it is important to understand that not all two pairs of hands are strong enough. Bottom two pairs like 2233, or 2244 and others can easily be beaten by higher two pairs like KK22 or AAKK. Apart from that, two pairs rank eighth on the poker hand rankings chart, which means there are seven other hands that can potentially beat the two pairs. Hence, one must be mindful and attentive when playing a two pair hand. Read the board, read and understand the opponents’ actions and understand what hand he could have, before going aggressive with your two pairs.

How you should play this hand also greatly depends on the stack you have. If you are short stacked, you may want to go all-in and win the pot to survive in the game. However, if you are deep stacked, you can take a call whether to play or not depending on the bottom pairs or higher pairs.

It is advised to fold bottom pairs in the following three cases:

If you have a two pair hand, you hold decent chances of winning, but remember it is  not very great. If the players on the table are playing passively, it could mean they have weaker hands, like a pair or high card, and hence are taking their chances. You can exploit such a situation to win the hand and thus ultimately the pot.

Like mentioned earlier, read and understand the dynamics of the table, and the opponents before taking any action with a two pair hand in poker.

What is a two pair hand in poker?

A two pair hand is any hand that has two pairs of identical ranks each and one kicker of a complete. In Texas Hold’em Poker, a two pair is a frequent winning hand. For example, AAKKJ, QQTT4 have two pairs each hence they are two pair hands.

What hand can beat a two pair hand?

Two pair hand ranks eighth in the poker hand rankings, and hence it can be beaten by higher hands like three of a kind, straight, flush, four of a kind, full house, straight flush and royal flush.

What is the best two pair hand?