How to play Hold’em ++ for Beginner: Basics and the Poker Rules 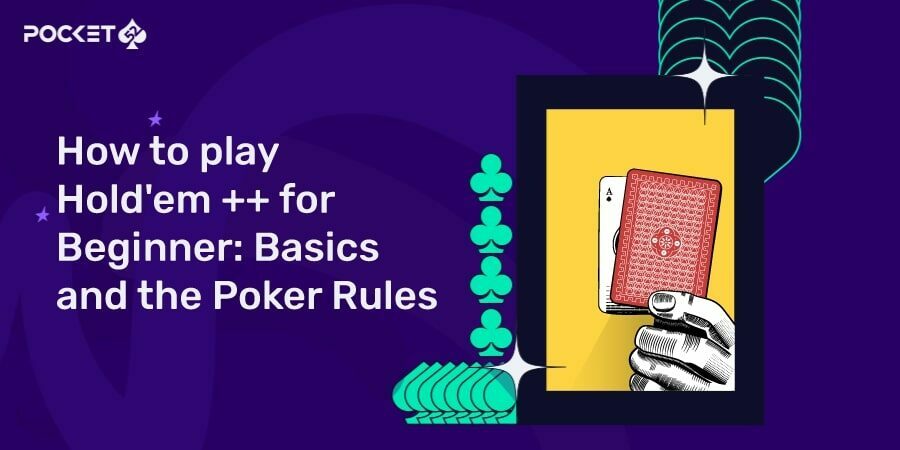 Poker is a card game where everyone wants to “win the pot.” No, we are not talking about a pot full of gold but rather chips!

The first poker was played in the United States in the 19th century. No one thought it would cross the geographical boundaries and become one of the most played card games in the world. Many people go to casinos for a simple game of cards to accumulate some profit. Of course, winning does not come as easy in it. It demands a lot of attention and skills from players. In the early 20th century, many types of poker games emerged in the market, but only a few were able to create a remarkable presence.

Read this blog to know more about one such game, Texas Hold’em!

As poker continued to gain massive attention worldwide, many variants resurfaced. Texas Hold’em is one of the trendy and most popular substitutes for poker. As much as the game is fun, it is unpredictable and can turn the tables in seconds.

As it is said, “If you’re playing a poker game and you look around the table and can’t tell who the sucker is, it’s you.” – Paul Newman.

Each player gets two face-down cards called hole cards and three community face-up cards. The game goes on with a series of three cards, called the flop, then an extra card, the turn or the fourth Street, and finally the last, the river or the fifth Street. Then, the players attain the best five-card poker hand by combining the community cards and their two hole cards to get the money.

Why is Texas Hold’em so popular?

Are you wondering why Hold’em is the most popular when various vtype of pokers exist? It is because:

The Basic of Hold’em

As stated before, Hold’em is comparatively easy and faster to learn than other poker card games. So, some basic details to know about how to play Hold’em ++?

The hand in Texas Hold’em

Players get five cards, two being the hole cards and the remaining being community. The one who manages to make the best possible hand with the available cards wins the pot. The rankings from highest to lowest in hands go as such:

Four cards of the same rank from all the suits. For example, K of Spades, K of Clubs, K of Hearts, K of Diamonds, and any other card.

Three similar cards of different suits with a pair. For example, 9 of Spades, 10 of Spades, 9 of Diamonds, 9 of Hearts, and 9 of Clubs.

Five cards in sequence but of different suits. For example, 9 of Hearts, 8 of Diamonds, 7 of Spades, 6 of Clubs, and 5 of Hearts.

Three cards with the same rankings. For example, 6 of Diamonds, 6 of Hearts, 6 of Clubs, 4 of Hearts, and 9 of Spades.

Two cards of the same rank. For example, A of Hearts, A of Diamonds, 8 of Clubs, 4 of Spades, and 7 of Hearts.

If you fail to make any of the above-mentioned hands, the card with the highest value plays. For example, there are 6 of Hearts, 8 of Spades, 2 of Clubs, J of Clubs, and 3 of Diamonds. In this case, Jack plays the highest card.

The poker table comprises four sections. Each section has its pros and cons.

There are two blinds at the table. They are the first two players to start the game. They must pay bets at the beginning of each hand. These players also perform the last pre-flop.

It consists of the next two or three seats at the table, preceding the last couple of seats and eventually leading up to the button. They act after the early positions place bets on the preflop betting round. They get an advantage to make better combinations as the early players have already played or folded their hands. Middle positions sit to the left of UTG and UTG+1 and are often known as MP and MP+1.

The Basic Rules of Hold’em

Hold’em is a variant of poker. Therefore, it operates somewhere along the same lines as the card game. The basic rules on how to play Hold’em ++ are:

Want to know more detailed rules about the Texas Hold’em? Read this guide to get in-depth knowledge about how to play Hold’em ++!

How to Deal in Texas Hold’em?

Mastering the game of Texas Hold’em ++ requires skills for sure. Do not worry; one can ace this card game splendidly with enough practice. But, the prime question is how to deal with it.

How to Bet in Texas Hold’em?

Betting is one of the most challenging parts of Texas Hold’em. To save you from going in the wrong direction, here are some rules that you must stick to when betting:

How to Shuffle and Raise in Texas Hold’em?

It is crucial to shuffle, arrange, and deal with the cards meticulously for several rounds. The improper shuffling of the deck can cause suspicion and arguments.

Here are some tips to shuffle and raise in Texas Hold’em like a pro:

Meanwhile, to raise in the Texas Hold’em:

1. The Button and Shuffling

The first and foremost thing you will see at a card game table is dealers shuffling the deck. It ensures that all 52 cards are present and gives a cover to inspect the cards timely.

A button is a small round disc at the table that rotates one seat to the left of every hand. The player who has the dealer button does not play the card.

A dealer button followed by compulsory bets called the small blind, and the big blind starts the game and rotates around the table throughout the play.

Each player gets two hole cards and begins the first betting round. The player right to the big blind starts the round with limping, i.e., the option to call or match the big blinds’ amount, raise, i.e., betting at least twice the amount the big blind did, or fold. The mucked cards are placed at the center of the table.

Each player gets the chance to call, raise or fold. The last person to play in the pre-flop round is the big blind. The big blind has to match the amount or fold their hands. However, they win the pot if every other player folds if one or more people raise.

Once the players have matched the amount raised or folded, they proceed to the next round, flop. The dealer puts the top card on the deck face down. The remaining cards are left face up. All the players who advanced to the flop round start another betting round.

The dealer burns one more card and places the next card face up to the right of the flop, following the flop round. This card is the Fourth Street or turn. The betting process begins all over again after dealing with this card.

The final round comes where the dealer burns another card and deals with the Fifth Street or River. He places the card face up right next to the turn card. All the players enter the showdown phase showing their cards to decide the winner once this round is complete.

How to play Hold’em ++ online?

Can one play poker online? Absolutely! You can download one of the many platforms available on the web to entertain yourself on a fine evening. One can enjoy manytypes of poker games at home with their friends.

Several websites and applications do not require registration and offer an exclusive venue to play online poker and card games with as many people as you want. But finding the right platform is quite challenging as so many of them exist. But we have got you covered.

Pocket52 is a fantastic platform to play Hold’em++. The platform is legal and has more than 10+ players. Moreover, the platform provides 24*7 customer support through call, chat, and email. Check out this platform now!

It is out of the question to debate whichtype of poker is the best. The Texas Hold’em stole the show for many gamblers and skilled poker players. It provides a fair chance to win to every player.

It keeps the players guessing who the winner might be but, at last, still manages to surprise them with the result. You will never know who is at the highest and lowest until the showdown.

As Benny Binion, Las Vegas visionary and the founder of World Series of Poker, said, “Trust everyone, but always cut the cards.”

So what are you waiting for? Play poker at Pocket52 now!

Yes, you can play Texas Hold’em with a bunch of two or more people. However, few rules change when there are only two players at the table.

2. What is the highest hand in Texas Hold’em?

3. Is position important in Texas Hold’em?

Every position at the table comes with advantages and disadvantages. One can enjoy the benefits of their position by knowing the strategies that can help them win.