The Many Differences Between Texas Holdem and Pot Limit Omaha Poker

Though Similar in Many Ways, No-Limit Texas Holdem and Pot Limit Omaha Poker are as Contrasting as the Sun and the Moon. Here’s how-

Though the rules are similar for both, there are some striking differences that set them apart from each other.

Betting: As the names suggest, in No-Limit Texas Holdem Poker the preferred betting structure is no-limit (a player can bet any amount he/she wishes) while there is a set limit to the betting structure in Pot-Limit Omaha Poker (which is generally set as the total size of the pot).

Bluffing: Bluffs, especially stone-cold bluffs, are an essential part of Texas Holdem Poker. But, it’s not so easy to bluff your way out in Pot-Limit Omaha games. PLO is considered a drawing game for a reason – there are many outs that will complete a hand by the end of the river. So, players are less likely to fold in PLO as compared to Holdem.

Hand Strenght:  The strength of the average winning hand is far greater in Pot-Limit Omaha Poker. While Pocket Aces (AA) is the best possible starting hand in Holdem, it’s win-rate percentage significantly decreases in PLO games since pairs rarely win at showdown. Pocket Aces can help form a strong preflop hand in PLO, but by the end of the river, it seldom remains the best possible five-card hand. The best hands in PLO games are mostly made on the turn or the river.

Preflop: In Texas Holdem Poker, one starting hand can completely dominate other hands on the table and the subsequent betting may end in all or most players folding their cards. In comparison, more player see the flop in PLO games as it’s rare for any single hand to have an absolute advantage at preflop.

Position: The position a player is sitting in is very important in Texas Holdem. But, it’s more so in PLO games. Players in late positions (Cut-Off, Button etc.) have the ability to pick up important information on their opponents and also gives them greater control over the pot. Positions in PLO games are mostly used to gauge odds and value-betting amounts of opponents. 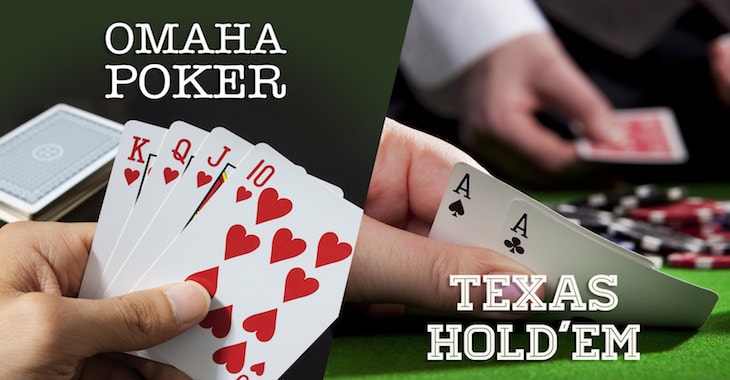 Winnings: Though Texas Holdem is played no-limit, the winnings of PLO are much greater owing to a large number of potential combinations that can be made with four hole cards which encourage players to stay in the game.

Bankroll: Poker pundits generally agree that one needs to have a bigger bankroll to play the same tables in Pot Limit Omaha Poker Game than in Holdem.

Variance: PLO is more complex than Holdem which rises out of the difference in variance in both the games. Variance is much greater in PLO than in Holdem.

Equity: In terms of equity, the preflop hands in Pot-Limit Omaha run much closer than they do in Texas Holdem making PLO more of a drawing game.

Showdown: At showdown, a player in Texas Holdem can win the pot holding only a High Card or One Pair. But, in PLO, High Card or One Pair (even Two Pairs) are seldom the best hands by the end of the river because of the large number of potential combinations that can be made with four hole cards which encourage players to stay in the game.

Nuts: In Texas Holdem Poker, players can bluff and play weaker draws aggressively and come out as the winner of the pot. The same strategy seldom works in PLO games and most players consider drawing to the nuts more crucial in PLO strategy. Pot-Limit Omaha is a nut game.

Ease of Learning: Texas Holdem Poker is the easiest poker game to play but takes time to master. But, a player can spend a lifetime on learning the intricacies of Pot-Limit Omaha and still come short because of the complexities and higher variance in the game.

Score a Half Century & Century and Your Daily Pocket Money Is On Us!