Benny Binion: The Father Of The World Series Of Poker.

Benny Binion was born and brought up in Texas in Grayson County, northern side of Dallas.
While travelling with his father, he learnt to gamble as a young boy. As he travelled with his father, the young man learned to gamble. 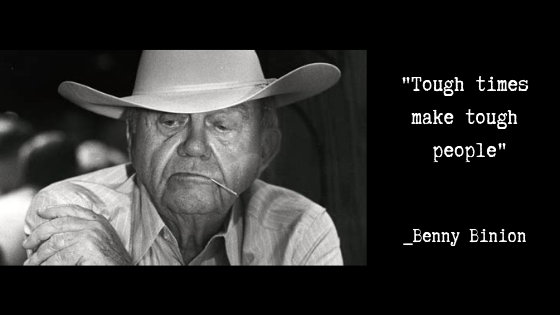 Benny Binion: The American Mob Boss and Father of WSOP_

After his criminal days were bygones, Binion took partnership in the Las Vegas Club casino. A year later when the casino was relocated, Binion faced licencing issues. He decides to quit the partnership to avoid the chaos.
Benny purchased a real estate which was earlier running in the name ‘The Las Vegas Club’. He reopened the club in the name of ‘Westerner Gambling House and Saloon’.

Benny Binion and the Birth of WSOP

Back in January 1949, Binion hosted a head-to-head poker tournament. Johnny Moss and Nick Dandalos a.k.a. “Nick the Greek” played heads-up. The tournament went on for five months.
After many years of hosting heads-up matches for high-stakes players, in 1970 an idea struck him. Binion deigned a tournament and for that, he invited six high-rollers he knew to compete in a tournament. They would play for cash on the table, after which the winner was voted for. In 1971, a freeze-out format was introduced with a $10,000 buy-in. Please mark, this is how the World Series of Poker (WSOP) was born.
He was inducted into the Poker Hall of Fame posthumously in 1990.