Johnny Moss: The Greatest Poker Player Of His Generation

Johnny Moss was The Greatest Of  his time Was The Inaugural Winner Of World Series of Poker Main Event. 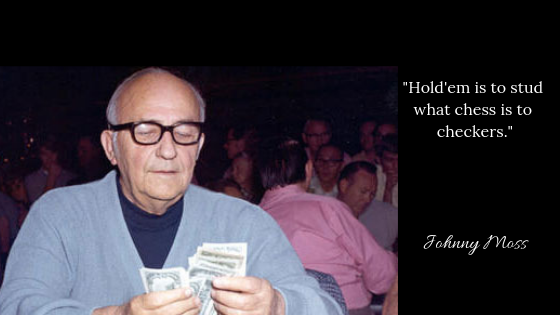 He was the first person ever to win the Main Event World Series of Poker. This was back when the tournament had a different format.

Later he won consecutively twice in 1971 and 1974 in the current tournament format. He was the charter inductees in 1979 in the Poker Hall of Fame.

As a young boy, he was hired by a local club to supervise over the games to make sure they were fairly played. While he was keeping the action safe from frauds, he was cementing the strategies of poker. A couple years later, he travelled the country hunting for game action and he became a rounder.

An interesting event: Heads up marathon with Nick The Greek

Moss played against Nick Dandolous a.k.a Nick the Greek in a “heads up” five-month-long poker marathon in 1949. The action was put in place by the alpha of the mob, Benny Binion. This won moss something between $2 and $4 million.