If You Play Poker in India, This is the Man You Should Be Thanking – The Legacy of Phil Sanders

He is the man who changed the shape of the Indian Poker Industry, the one who all poker players in India owe a great debt to. Philip Sanders not only gave the Indian Poker scene a revamp, he also took it to new heights of profits and showmanship with his more than a decade of experience and expertise in the casinos, providing the necessary drive to propel poker in India.

It was when Phil was working as a junket operator for clients in Asia that he first started his association with India. Realising that Goa was becoming the favourite vacation spot in India, with foreign visitors choosing to seek entertainment in Goa more than anywhere else in India, Sanders came and settled in Goa, working with Goa Coastal Resorts and Recreation India as a Consultant.

Working with Casino Royale in Goa, Phil Sanders spearheaded the first official poker room in India. He also reached out to his close associate, Craig Wildman, to help him revolutionise the game of skill in the subcontinent. Wildman was hired as the Manager and in-house Tournament Director and the pair soon transformed the poker scene in India with their tenacious planning and steadfast discipline, ensuring international standards of playing in their casinos.

A few years ago, on 23rd October 2015, Phil Sanders breathed his last as he succumbed to cancer at his home in Birmingham, England. He may be gone, but his endeavours in reshaping the poker industry in the Indian subcontinent will forever be remembered and treasured.

Many renowned first-generation professional poker players like Abhishek Goindi, Sangeeth Mohan and Aditya Sushant etc. owe Phil Sanders their start. Phil’s was highly influential in having the Asian Poker Tour (especially the Main Event of the Asian Poker Tour India 2012) being hosted in India, not just once but twice! The Asian Poker Tour is Asia’s most prestigious poker tournament and has been successfully running since 2008 at various countries like the Philippines, Macau, South Korea, Cambodia, Vietnam, Australia, London, New Caledonia and Cambodia. 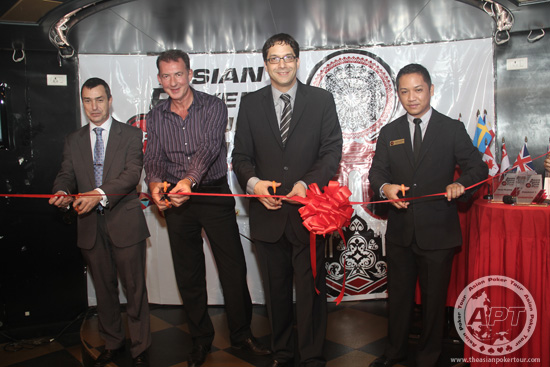 Phil Sanders at the grand opening of the 2012 Asian Poker Tour. Source: APT

Along with being a master businessman, Phil Sanders was also a very accomplished poker player, having shipped many reputable tournaments, including the 5K Freezeout and the 250k High Roller at the APT Asian Series Goa 2011 and the Indian Poker Pros IPP Feb 2012 Event. Sanders’ biggest tournament win came in 2011 at the APT Asian Series Goa where he bagged ₹12.35 Lacs at the 250k High Roller event.

Phil Sanders was working with Casino Carnival but had to quit when he suffered some serious health issues for which he had to make regular trips back to the United Kingdom for his treatment. But, cancer ultimately claimed the legend.

Many poker players in India still remember Philip ‘Phil’ Sanders for his role and his innumerable contributions to the Indian Poker Industry, always complimenting his soft-spoken nature and calm temperament.

Read more:
Will Cancer-Stricken Kevin Roster End on a High Note & Win A WSOP Bracelet?
Daniel Negreanu Leaves Pokerstars | Phil Ivey Joins Masterclass
#RetirementPlans: Footballer to Pro Poker Player Neymar Jr says Andre Akkari
The Reason Why Pocket52’s RNG+ Platform is a Cut Above the Rest
The Many Differences Between Texas Holdem and Pot Limit Omaha Poker
Score a Half Century & Century and Your Daily Pocket Money Is On Us!
Interviews with Poker Players
Learn How To Play Poker