Thomas James Cloutier a.k.a T J Cloutier was born on October 13th of 1939.  He was born in Richardson, Texas. Cloutier is a professional Poker Player. 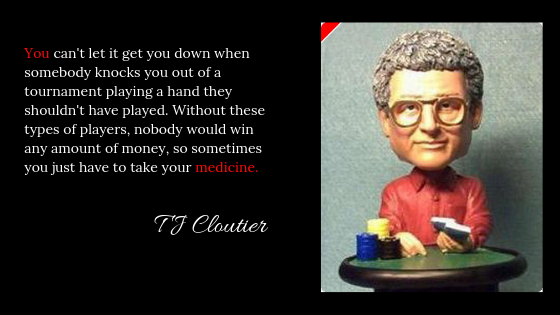 As a young boy, he received an athletic scholarship for football and baseball. Through this scholarship, he took admission in the University of California, Berkeley. Thereafter he played for the Rose Bowl in 1959. Yet, later he had to drop out of the college due to financial issues in his family.
Later T J Cloutier was drafted into the US Army. He played football in the Canadian Football League for the Montreal Alouettes and Toronto Argonauts. Unfortunately, a severe injury rained on his football career. Thereafter Cloutier started a food company which wasn’t very successful.
T J Cloutier specialized in tournament poker…
…especially Pot Limit and No-Limit Hold ’em. He is known to be the only person in the history of the World Series of Poker (WSOP) to have won in three types of Omaha. Pot Limit High, Limit High, and Limit 8-or-Better High-low split are the three types of Omaha. Cloutier has won six WSOP bracelets in all, throughout his career. He has also won many other titles for many other poker games.
In 2006 he was inducted into the Poker Hall of Fame.