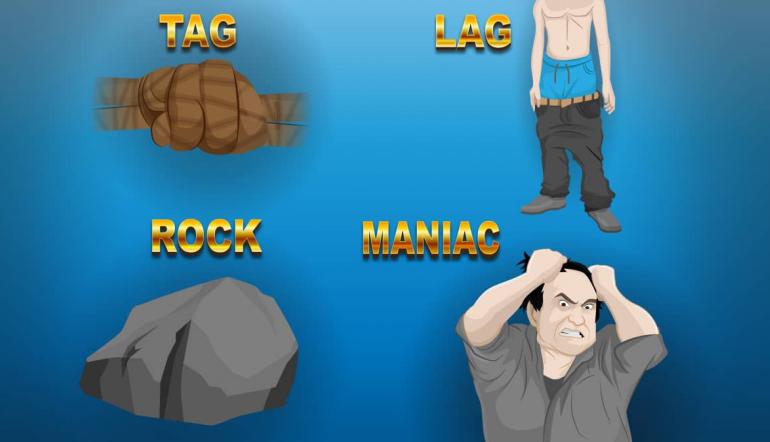 A player is known by how he selects his hands, which cards he folds and which he/she calls or raises – that’s the primary difference between an amateur poker player and a professional. The starting hands and the betting patterns of a player usually define the type of playing style of a poker player.

So, there are two factors that define the general playing styles –
i) Tight vs. Loose
ii) Passive vs. Aggressive.

As someone rightly put it, “Being tight or loose doesn’t necessarily refer to how somebody plays their hand, but merely the selection of hands that they play.”

The betting pattern is the relationship between betting and raising to calling. Also, you have to take into consideration the risk tolerance factor, as well.

So, a player can play in four different possible combinations. Here are the 4 basic types of playing styles in poker, which can be displayed in a 2×2 matrix-

Even though not totally impossible, it is highly impractical to play in a loose-passive style and make a profit in online poker. The end result is almost always the same – the calling station gets bust.

A tight-passive player can significantly reduce his/her losses as they refrain from calling often. But, by playing this way, a player cannot get maximum profits on his/her good hands.

The LAG style of play is most used by professionals while playing tournaments. It is important to note that LAG is a high-risk strategy play and should not be played by just about anyone.

Since TAG players bet with only the best hands, they have the highest chance to win the pot when they do play a hand. Most poker pundits agree that the tight-aggressive strategy (TAG) in poker in the most profitable one.

The Nit: almost always folds the very few (<15%) starting hands he/she plays. Many Rocks and some TAGs are Nits. Nits only call or bet if they have a very strong hand
The Maniac: plays very loosely and very aggressive player. Don’t go on tilt if the maniac wins with weak cards. But, in the end, the maniac will always go bust.

It’s only by knowing how to master the basics do you become a poker player who is taken very seriously by his/her opponents. Learn more about the basics of poker-